Call for a Commission of Inquiry into May 2008 violence 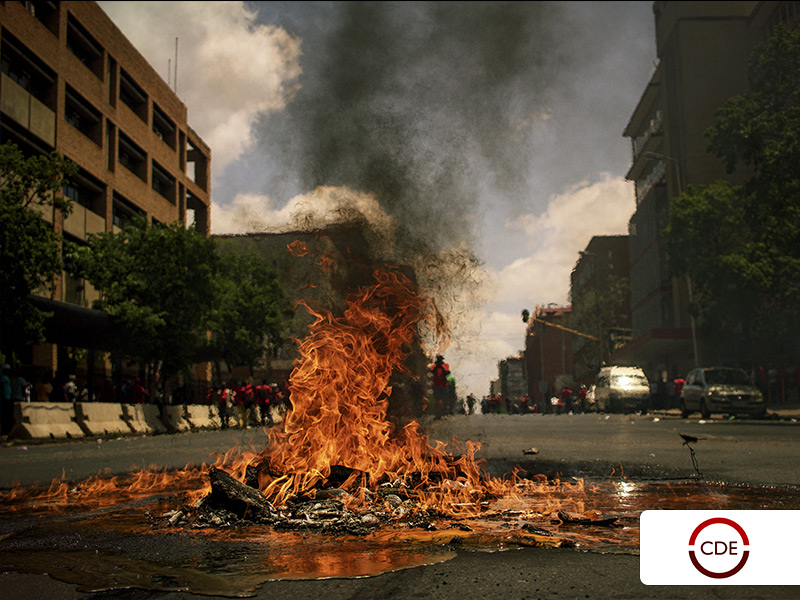 ‘Government officials came here and went to the police stations where foreigners are kept. They never came to the people of Alex. Why don’t they call a meeting to the FNB Stadium and ask what the problem is?’ – Alexandra resident, interviewed by the HSRC.

SOUTH AFRICA’S PRESIDENT should appoint an independent expert commission, headed by a respected, senior judge, to investigate the May 2008 violence.

The basic facts are well known. Violence broke out on May 10-11 in Alexandra, Johannesburg; spread quickly to other Gauteng townships; and then to Cape Town, Durban, and Port Elizabeth, and possibly elsewhere not reported in the national media. By June police estimated 62 deaths, 670 people injured, and tens of thousands displaced from their homes.

The term ‘xenophobic violence’ is now generally accepted as an accurate description of what happened in May. Yet one third of those killed were South Africans. Many reports talk of attackers wanting to get rid of ‘Shangaans’ as well as foreigners. Over the past few years South Africa has seen a growing number of violent protests in towns across the country. In our detailed study of two of these towns, entitled Voices of anger. Phumelela and Khutsong: Protest and conflict in two municipalities (April 2007), CDE learnt a great deal about the complex and worrying realities that lie behind the headlines and TV pictures.

The May violence was almost certainly much more complicated than it initially seemed. Causes of the violence run deeper than an alleged extraordinary South African hatred of foreigners.

We need an impartial, expert inquiry to take us beyond the ‘sound bytes’ and basic facts to understand what happened. As things stand, and the South African economy slows down, there is every reason to fear further outbreaks.

A commission should inquire into what happened, where, why, and how. It should recommend what should be done to prevent this violence and destruction from happening again.

The extent and nature of violence. Who started it, who joined in, why did it happen? Was violence instigated by outsiders or particular groups? How did it spread from place to place? Why did some communities participate and not others, even though they were equally poor or hosted large numbers of foreigners? Was there some distinguishing set of characteristics for those places that erupted or those that did not?

Local socio-economic conditions. Was the violence mainly centred on informal settlements? Were there some common factors -rate of youth unemployment, hostels, large presence of newcomers, large number of shack dwellers with insecure tenure? What role did the tempo and extent of population expansion play? Were concerns about ‘foreigners’ or about ‘more people’ in communities with very few resources an important factor?

What do people mean when they talk of foreigners? Recent migrants to South Africa? Foreigners who have lived here for decades? Newcomers to their area even if they are South African?

Criminality and lawlessness. To what extent has the rule of law broken down in some communities? What is the scope of criminality, how much are vigilantism and violence used as a means of social control? How much trust is there in police and courts? What are the roles of these factors in permitting or causing murders, violent attacks and looting?

Corruption and resource allocation. Who got what and how? How are houses and land being allocated? Is it true that corrupt officials or locals are selling houses to ‘foreigners’? What is the performance of authorities in and affecting communities – local officials, politicians, Department of Home Affairs? What is the extent of corruption in police and local government?

Failure of democratic accountability. Anecdotal reports indicate widely felt assertions of ‘government not caring about us’; that politicians and officials get rich while communities are neglected and bear the brunt of unplanned, unacknowledged population expansion without sufficient indication that government knows this is happening or has a plan on how to cope.

Attitudes and perceptions. Why are foreigners perceived to ‘get ahead’ and ‘work harder’ than South Africans? Is it the case that foreigners create jobs for themselves and others, whereas locals ‘wait for someone to help’ them? If true, what has contributed to this local culture of passivity and entitlement?

Zimbabwe crisis. To what extent if any, did exaggerated estimates of the numbers of Zimbabwean migrants by senior politicians and a failure to acknowledge the impact of the ongoing crisis in that country on South Africans play in the violence and its timing?

The role of the media. Did some media -either through how they have described foreign migrants over a long period or in its immediate coverage of the violence – in any way provoke or encourage attacks?

Had government been warned of increasing tensions in certain communities which might have resulted in violence? If so, did they act? If not, why not?

How did government respond to the initial outbreak of violence? Did they react quickly or forcefully enough? Was there anything more they could have done to quell the violence so that it did not last as long as it did?

The May 2008 violence did terrible harm to tens of thousands of people and to the country.

We need to understand what happened, and why, if we are to prevent the recurrence of murder, violence and destruction.

In order to penetrate the misinformation surrounding migration issues, bring the widest possible range of evidence to bear, give voice to individuals and communities involved, restore confidence here and abroad in the country’s determination to address issues that threaten stability, South Africa needs an impartial, authoritative investigation. The president should appoint a judicial commission of enquiry as a matter of urgency.

* CDE has done considerable work on migration policy, and two reports on this subject will be released within the next few weeks.