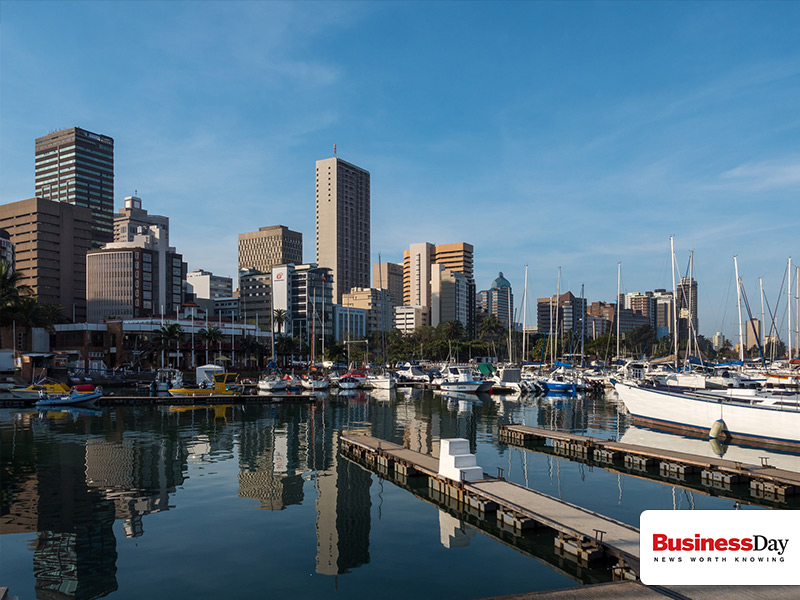 Relatively low-crime levels, the country’s leading port, a new international airport, a thriving industrial economy, a sound system of local and metropolitan finance and the country’s largest domestic and fastest growing international tourist market are all signs of potential which is only just beginning to be realised.

This does not mean that other cities cannot compete on their own merits and it is not a foregone conclusion that Durban’s leadership will make the tough choices needed to turn the city into a truly global player. But it does mean that the prospect of being South Africa’s leading global competitor is there for the taking.

Greater Durban is the country’s second largest metropolitan complex with a population last year of 3,2 million projected to reach 4,8 million by 2011. It is one of the fastest-growing urban centres in the country and its projected population growth rate is the highest among South Africa’s top five metropolitan areas.

It is the most African of the country’s largest cities. The ratio of blacks to whites in the Durban metropolitan area (6,6:1) is more than twice that of Johannesburg/East Rand (2,5:1) and almost six times that of greater Cape Town (1,2:1).

Durban’s uniqueness does not end there. It is home to most of the country’s Asians and whites are disproportionately English-speaking. Last year there were 600 900 Asians in Durban and 336 800 whites.

While Durban has more informal settlements than any other South African city, the World Bank believes the city’s existing and projected population could be properly serviced within five years. The Tongaat-Hulett planning forum believes it can be done in 15 years.

The latter assumes a financial model in which services are phased in according to realistic delivery capacity, as well as local and metropolitan tax rates that do not deter investors. So, while the bad news is that Durban has a very extensive infrastructural challenge, the good news is that the money for it can be found.

In the case of transport, which presents a problem in many cities of the developing world, Durban is relatively privileged. Although it may not be a transport planner’s model city, its transport system functions effectively.

Most importantly, Durban has a surprisingly complex and buoyant economy. It has already overtaken the East Rand as the centre with the most industrial jobs, and prime industrial land in Durban is the most expensive in South Africa.

The port continues to stretch is lead over others in terms of volumes of cargo, despite measures by Spoornet to equalise the costs of overland transport to Gauteng from Cape Town.

The crime rate in Durban is lower than in Johannesburg or Cape Town. While the city does not attract as many foreign tourists as Cape Town, it remains the country’s premier domestic tourist destination. As in South Africa’s other large metropolitan centres, its commercial and financial sectors are growing rapidly.

Its economic buoyancy derives from the proliferation of local small enterprises or branch plants, the latter underscoring the extent to which Durban is part of the national economy.

The most buoyant component of Durban’s industrial sector is firms of fewer than 40 employees. Moreover, in both the commercial and industrial sectors, smaller enterprises are more likely to be black-owned.

A small but energetic group of young business leaders has emerged in Durban. Combining a broad developmental outlook with their business interests, they have begun to place the city on a more competitive national and international footing.

They conceived of a new international airport; started Operation Jumpstart whose proceeds (R142m so far) are largely used for socio-economic upliftment; and are working with local leaders on a range of projects including the international convention centre, the Point redevelopment and north coast tourism initiatives.

Durban’s future success will depend on how the city deals with a number of critical issues. Can Durban become a world-class port? Is this what the city’s leading constituencies want? What are the other alternatives for growth and development?

What is needed is a growth-oriented vision of excellence. This should build on a thorough understanding of the Durban economy and the trends that affect it; take cognisance of competitors; and define the obstacles to success. It will then be possible to define a programme of action to achieve this vision; choose areas for public and private sector intervention; and make
the tough trade-offs required to achieve results.

Turning market forces to Durban’s advantage, will require dynamic leadership. The city already has a competent and committed business and political leadership. The challenge facing this emergent group is to turn around a legacy of parochialism; move beyond racial constraints; build on the city’s unusually diverse political and ethnic mix; start thinking globally while acting locally; make the right policy trade-offs and communicate these decisions to constituencies.

If Durban is to become a global player, the nature and function of city government needs to change. Local and metropolitan governments must facilitate growth and development in line with a new set of goals. They must become more informed, more politically sophisticated and more adept at working with others.

A successful Durban will need political strategy. It will need to collaborate with other large South African cities to acquire the power and influence needed to deal with the challenges of globalisation.

For example, does Durban need an executive mayor or some other new form of government more appropriate to a large city? A globally competitive Durban needs a strong say over local ports, airports, trains and other forms of transport – powers traditionally held by central government.

Vision must be marketed

Durban will need to market its vision of becoming globally competitive to provincial and national leaders. Everyone else must see the benefits for the country as a whole of Durban succeeding as a global city.

National policies and programmes will need to be monitored to ensure nothing is done to prejudice the city’s attempts to become globally competitive; and conversely that everything possible is done to support it.

Durban needs to recognise that the health of other cities, particularly Johannesburg, is an issue of strategic importance for its own future. Resources and senior personnel must be allocated to these important political tasks.