Development Talk: The role of business in South Africa’s future 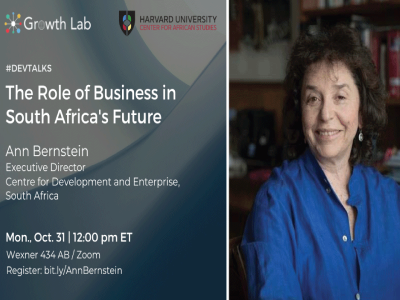 Ann Bernstein was speaking at a hybrid event at the Harvard Growth Lab in Boston.

The Growth Lab’s Development Talks is a series of conversations with policymakers and academics working in international development. The seminar provides a platform for practitioners and researchers to discuss both the practice of development and analytical work centered on policy. This event is co-sponsored by Harvard’s Center for African Studies.