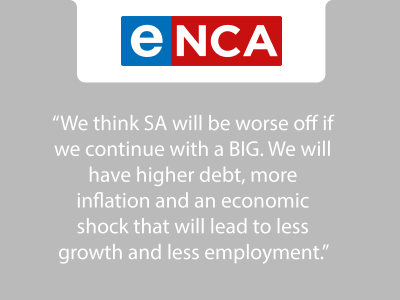 CDE’s Ann Bernstein spoke to Masego Rahlaga of eNCA to discuss the idea of a basic income grant. She argued, “Actions have consequences, you raise taxes and you will have enormous consequences on our economy so that’s the point we’re are making. It’s not just about making a basic income grant, but the key question is how can we afford it?”

This media interview is based on a new CDE report titled Poverty and a Basic Income Grant: Six questions about a BIG