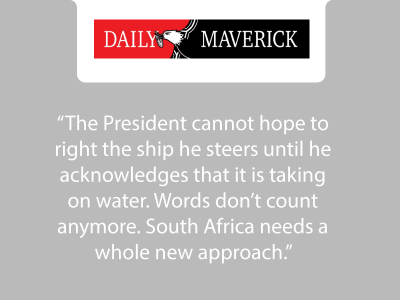 Why does business continue to offer its support for President Cyril Ramaphosa’s October 2020 economic reconstruction and recovery plan, which is neither a plan nor a strategy and has no chance of returning the country to growth or much-increased employment?

President Cyril Ramaphosa introduced an economic reconstruction and recovery plan in a speech to the National Assembly in October 2020. To read it today – about 15 months later – is to be reminded of both its implausibility and of its hubris.

This document – it is not a plan – contains literally dozens of priorities, grouped together as “priority interventions” (nine of them), “key enablers” (five or 10, depending on how you count them), and structural reforms (nine listed on page four, but literally dozens listed elsewhere). This is to say nothing of the requirement that all interventions must “protect vulnerable workers, households and firms; build consumer, investor and public confidence; deepen industrialisation through localisation; pursue environmental sustainability; deliver quick wins; and continue providing relief to mitigate the impact of Covid-19”.

It was obvious at its launch that the plan was unworkably broad and ambitious. Consider, in this regard, the list of “additional enablers of the plan”, the nine items of which are: “Developing and finalising employment and labour migration policies; Reviewing labour market policies relating to issues such as retrenchments and wages; Promoting greater shop floor partnerships and reduced industrial downtime; Reinforcing an ethical culture; Promoting access to quality, affordable and universal health care; Input by various social partners into MTBPS as part of contributing to resource mobilisation; Increasing the level of investment by the private sector; Support commitments made at the Presidential Investment Conferences; Pay statutory and contractual contributions such as unemployment insurance, skills levies, electricity bills and traffic fines.”

To say this list is a mish-mash of ideas operating at entirely incompatible levels is to understate its silliness, but it is rendered all the more inadequate by the complete absence of any discussion of sequencing, relative prioritisation, or, indeed, whether all (or any) of these “enablers” is a necessary condition for success or just something that might be nice to have.

It feels almost as if the idea behind this strategy is to list all possible interventions that might be beneficial. That, however, is exactly the opposite of a strategy. Strategy involves making choices between possibilities, not a list of all of them.

Why does business continue to offer its support for this document, which is neither a plan nor a strategy and has no chance of returning the country to growth or much-increased employment?

What would an actual growth strategy look like? One that was plausible and implementable and not premised on capabilities the country – and the state – does not have.

Those are, in all fairness, some very hard questions.

There are no off-the-shelf models that can be implemented, and no one-size-fits-all approaches to achieving more rapid growth. What is required to get one economy to grow differs from what is required to get another to grow: you would not expect China and Sweden to have the same set of priorities; nor would you expect the China of 2022 to have the same priorities as in the 1980s.

The overwhelming priority for any credible growth strategy must be a commitment to priority actions that address our most fundamental weakness: the deepening sense that the country is declining, and that its decline is accelerating.

That sense is reflected everywhere, from the unprecedented collapse in both consumer and investor confidence in recent years, to the mass stayaway from the polls during the recent local government elections; from the steep risk premium that drives South Africa’s ultra-high real interest rates, to the despair and frustration with which home and business owners greet each new round of load shedding.

When it comes to the economy, gloom and pessimism are self-fulfilling prophecies: because firms and households think the country is in decline, they don’t invest in homes or businesses, and those who have options and resources – most, of course, do not – act to reduce their exposure to local risks by diversifying into foreign markets, exporting capital, sending their children overseas or emigrating themselves.

Saying that one must arrest the sense of decline is one thing; doing it another. There are two preconditions for making progress on this front. First is an explicit recognition that this sense of decline and “exit” exists and that it accurately reflects the underlying realities. Second, we require a frank diagnosis of the causes of decline that is capable of persuading citizens, families and investors that, at the very least, the government understands how serious the problem is.

There are, of course, as many reasons for the perception of decay and decline as there are symptoms of it. It is, however, hard to think that anyone would dispute that, at the centre of it all lies a sense that there are, in South Africa, no consequences for insurrectionists, State Capturers, PPE crooks, criminals of every kind and gross incompetence at the very highest levels of the state. Unless and until that is rectified, it will simply not be possible to see sustained growth in investments.

A second reason for the sense of decline – as important as the first, even if not as widely agreed upon – is the sheer mess of the government’s financial position, the unsustainability of which has been evident for years, but which continues to deteriorate as the government vainly hopes for a growth miracle that will save it from itself. The sense that there is no hand on the tiller when it comes to the trajectory of public spending is now overwhelming.

Like all miracles, sustained growth is vanishingly improbable, and the longer the government sits on its hands waiting for it, the less likely it will become.

Sadly, it is too generous to say the government is sitting on its hands. In practice, it is constantly entertaining a lengthening list of bad policy and spending ideas. These now include expropriation without compensation, localisation, a debt-financed basic income grant, the construction of at least one new “smart city”, and a national health insurance, to say nothing of the decision to extend a non-pensionable allowance to public servants, largely undoing the oft-repeated commitment to contain remuneration growth.

Given the state of the government’s balance sheet, continued deterioration in performance of state-owned companies, collapse of our infrastructure, and the lawlessness that made possible the horrifying violence in July 2021, you would have thought that the government had enough on its plate already.

This is the context in which one should read something like the October 2020 economic reconstruction and recovery plan, which is all-encompassing in its reach and ambition while being completely naïve about the capabilities of the state and the challenges it faces. By failing to engage with the real causes of the decline, or the choices that must be made, such documents make matters worse rather than better. And reinforce doubts about the government’s grasp of the seriousness of the decline over which it is presiding and for which it is largely responsible.

Just as an alcoholic cannot begin to recover until she admits the problem, the President cannot hope to right the ship he steers until he acknowledges that it is taking on water. Words don’t count anymore. South Africa needs a whole new approach.

Ann Bernstein is executive director of the Centre for Development and Enterprise.

Article published by the Daily Maverick