Discussion on a basic income grant in SA 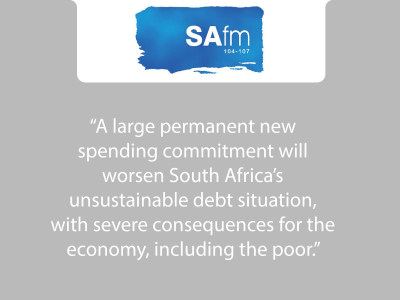 In a discussion on SAfm’s Sunrise breakfast show hosted by Stephen Grootes, Ann Bernstein was joined by Duma Gqubule as part of the Mediated Conversation segment to unpack the pros and cons of instituting a basic income grant in South Africa. She argued, “South Africa already has enormous debt and we’re saying that current spending is already unaffordable. We are living way beyond our means and adding a large permanent spending commitment will reinforce the unsustainable trajectory of fiscal policy.”

This media interview is based on a new CDE report titled Poverty and a Basic Income Grant: Six questions about a BIG