CDE Conversations | Lawrence H. Summers on Are we heading for a global economic slowdown? 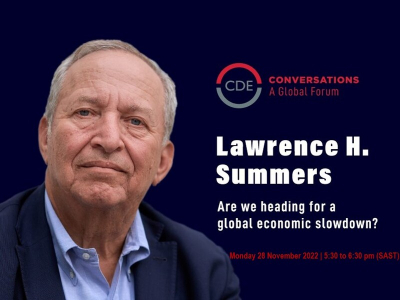 Lawrence H. Summers, one of America’s leading economists, was Treasury Secretary in the Clinton Administration, Director of the White House National Economic Council in the Obama Administration, President of Harvard University and Chief Economist of the World Bank. In various capacities, he has played a key role in addressing the major financial crises of the past three decades. See his bio here.

Ann Bernstein, CDE’s executive Director was in conversation with Dr Summers. The main topic of the discussion was: Are we heading for a global economic slowdown?

This webinar aired on Monday 28 November 2022