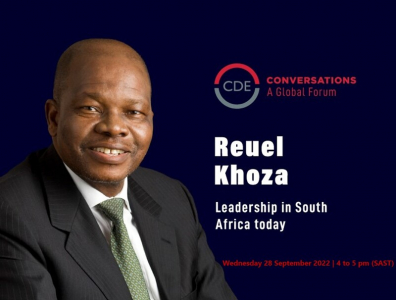 Dr Reuel Khoza, influential business leader and author is chairman of Dzana Investments (Pty) Ltd, Discovery Bank and Assupol Insurance Group. He has previously chaired the boards of the Public Investment Corporation, Eskom, Nedbank, Globeleq and GlaxoSmithKline SA and he has held many directorships in South Africa’s largest companies. He has been involved in the formulation of the King Codes on Corporate Governance and is the chancellor of the University of KwaZulu Natal. See his bio here.

Ann Bernstein, CDE’s executive Director was in conversation with Dr Khoza. The conversation focused on Leadership in South Africa today.