CDE @ 25 | Lesetja Kganyago on ‘The economy, jobs and growth’ 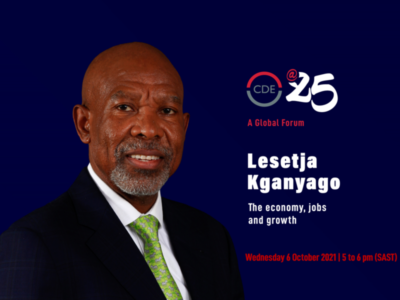 Lesetja Kganyago is governor of the South African Reserve Bank (SARB), currently serving a second term since his appointment in 2014. He was deputy governor between 2011 and 2014 and director general, National Treasury prior to that. Until recently he chaired the International Monetary and Financial Committee, the primary advisory board to the International Monetary Fund (IMF) Board of Governors. See his bio here.

Mr Kganyago was in conversation with Ann Bernstein, CDE’s executive director. The conversation focused on The economy, jobs and growth.