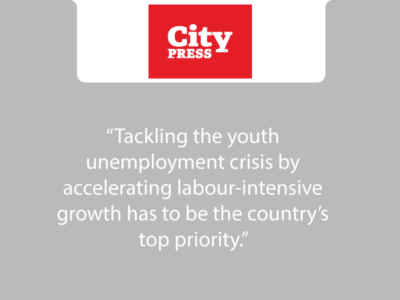 “If you can’t solve the problem of getting young people into work, it may not matter what other problems you do solve.” Paul Romer, Nobel economics laureate

The latest Quarterly Labour Force Survey (QLFS) statistics confirm a shocking reality: three out of every four South Africans (74.7%) between the ages of 15 and 24 who want a job cannot find one. For those between the ages of 25 and 34, things are somewhat better, yet still the worst they have ever been: more than half 51.4% of them are unemployed.

Tackling this crisis by accelerating labour-intensive growth has to be the country’s top priority.

Unless young people become part of the employed workforce in much larger numbers soon, political leaders will become increasingly dysfunctional human potential will be wasted and hopes of creating a stabler, more inclusive and prosperous country will remain mere pipe dreams.

South Africa’s expanded unemployment rate is 43.2%, the highest it has been since the start of the QLFS in 2008. The data unequivocally reveal that the labour market remains especially inaccessible to young workers. The overall youth unemployment rate sits at 57.5%. The 6.8 million young people unable to find jobs constitute the majority (59.2%) of the unemployed.

The Covid-19 pandemic has turned what was already a crisis catastrophe. The severe 7% GDP contraction suffered last year prompted a huge increase in the number of jobless young people. The youth unemployment rate rose by more than five percentage points as a result of the pandemic, while nearly 1 million fewer young people are in employment now. On average, 444 young people have joined the unemployment queues every day since the start of the pandemic.

Too many young people are disconnected from economic opportunities – and they feel this exclusion in deeply personal and damaging ways.

As one young person put it: “You feel as if you’re useless: You don’t belong to earth; you aren’t even a human being.”

Being jobless also affects a person’s future employability. Employment is a form of education and training, providing workers with knowledge, skills, discipline, networks and other capabilities that cannot be gained through formal educational instruction. This is what US economist Paul Romer means when he refers to “work as school”, and it is the reason employers often prefer people with work experience over those who have none.

The long – term unemployed, by contrast, become increasingly ill – suited to the needs of the economy – their training becomes less relevant, their skills deteriorate and their ability to signal their workplace readiness lessens. They are therefore doubly disadvantaged in a country where too few jobs are being created.

Better learning outcomes are often seen as the best way of improving young people’s employment prospects. It is true that upward social mobility is strongly correlated with education levels in South Africa. However, the country’s educational attainments remain extremely low: only 37% of pupils who start Grade 1 together will pass matric; 14% will obtain university entrance exemption; and only 4% of the original group will receive a tertiary qualification within six years of leaving school. This is a devastating underperformance for an education system.

The situation is worst for those who are not in employment, education or training (NEET). Altogether, 9 million 43.6% young South Africans are classified as NEETs. These are people who are excluded from the economy and are struggling to access it.

Even among the working youth, more than a quarter (27.6%, or 1.4 million) are informally employed. This points to further disadvantages experienced by the youngest segments of the workforce. A formal job is much more likely to be a sustained route out of poverty than an informal job, given the importance of on-the-job training for future employability.

Taken together, these numbers reflect a disturbing truth: this is no country for young people.

As politicians commemorate Youth Day on Wednesday, it is important to note the policy choices they have made that have created a catastrophic situation facing the vast majority of young South Africans. Our current approach to economic growth and jobs, as well as education, is failing young people. As a matter of urgency, we need to rethink our approach to the labour market, especially in regard to absorbing unskilled young jobseekers into formal positions.

TOWARDS A BIGGER, BOLDER REFORM APPROACH

Policy reform is urgently required. If we are to make a significant dent in these catastrophic youth unemployment levels, we have to change the rules and regulations that shape the way our economy functions so that it grows much faster and creates jobs far more rapidly than was the case long before Covid-19 struck.

Given the depth of the youth unemployment crisis, there is no plausible strategy for rapidly reducing unemployment in the short term. A job creation drive launched by President Cyril Ramaphosa is under way, but is still in its infancy. The biggest component of this state driven initiative consists of placing young people in schools for a few months. Despite the president’s seal of approval, the jury is still out on the likely success of this expensive exercise. However, what must be grasped is that the scale of any public employment drive will be too small to make more than a shallow dent in the massive challenge we confront. Unless these education opportunities provide useful work experiences and on-the-job training, they will fail to make much difference to the long – term prospects of the young people who participate in them.

There is, however, considerable scope for reforms that would improve the performance of the economy and deepen the inclusiveness of growth by increasing employment. We need more bold signals that will encourage the investment and expansion of existing firms if we are to create enough jobs in the future. The bottom line is that firms need to be incentivised to hire young, unskilled workers instead of being encouraged to switch to mechanisation and automation.

We need reforms that will create space for new, more labour – intensive activities to emerge and grow, including legal exemptions for small and new firms from collective bargaining agreements to which they are not party, as well as rebalanced collective bargaining structures to provide greater representation of smaller firms’ concerns.

We should expand and extend the employment tax incentive to a wider range of workers and for a longer period, and introduce modest reforms to hiring and firing. Making it easier and less risky for firms to terminate new employees during their probationary periods, for example, would help remove risk from the employment decision, especially with regard to new, inexperienced young workers.

Given that these changes represent a significant policy shift and will most likely face considerable antagonism in the governing party alliance, the Centre for Development and Enterprise has proposed an experimental special economic zone designed for labour -intensive manufacturing in which labour market rules would be somewhat liberalised to test the proposition that jobs would be created under those conditions.

We also need to start tackling youth unemployment on as many fronts as possible by reforming the education system, improving the way young people are trained for potential jobs, bringing in skills from all over the world to help train South Africans and grow the economy, and removing all structural constraints on growth. We need to do whatever is possible to get as many young people as we can into formal jobs.

South Africa has a growing youth population. This should be a resource we can tap to generate growth and contribute to development – what economists call a “demographic dividend”. If we do not after the course of our economy, however, we will reap a demographic disaster instead.

Article published by the City Press