South Africa’s NEETs crisis: Why we are failing to connect young people to work 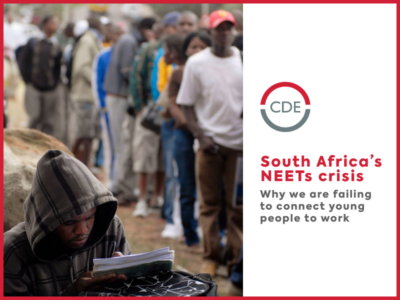 Launching a new report today, Ann Bernstein, CDE’s executive director, called for decisive action to tackle South Africa’s NEETs crisis. “There are now 9.1 million people between 15 and 34 years of age who are not in employment, education or training.”

Bernstein said that, while the implications of the July insurrection are still unclear, “the opportunistic looting that we saw clearly reflected young people’s rising frustration and desperation.” Quoting Paul Romer, a winner of the Nobel Prize in economics, she said that if South Africa does not solve the problem of youth unemployment, it may not matter what other problems we do solve.

According to Bernstein: “Government and business must re-examine their priorities, and move away from ad hoc interventions in failing systems and ‘boutique projects’ that make a good photograph but cannot deliver anything that is really transformational.”

“Government’s focus on projects, special initiatives, summits and talk shops is the wrong priority. They divert resources and leadership from absolutely essential reform which is the only way to start tackling the scale of South Africa’s youth challenge.”

CDE supports Minister of Finance Enoch Godongwana’s call to get most young people into employment rather than having them become dependent on something like a basic income grant. “Jobs”, said Bernstein “are the first step to individual empowerment and independence.”

“One of the worst places to be a young person in South Africa is Bushbuckridge with a youth unemployment rate verging on 80%.” CDE interviewed young people who have experienced short spells of employment. They sometimes venture out to Nelspruit or even Johannesburg, but they run out of money or have to return home. They always find themselves back where they started: not in employment, education or training.

The report examines the role and performance of SA’s skills system, and finds that constructive cooperation between businesses and technical and vocational colleges remains the exception rather than the rule. Dr Schirmer noted that South Africa’s skills training system is expensive and inefficient because it fails to provide the skills employers are looking for and is characterised by very high dropout rates.

Most colleges are “a recycling system for secondary school finishers”. Dr Schirmer said that they keep some young people occupied for three to four years, delaying their entry to the labour market, but they are not doing nearly enough to provide the job-relevant skills that would boost young people’s employment prospects.

Bernstein called on government to “stop pretending that if we avoid the big policy issues, the difficult reforms, we can somehow make a difference, and turn this crisis around.”

Identifying three critical areas for reform, she said SA needed to implement a range of structural reforms essential to accelerate economic growth, free up the labour market so that growth would become more labour intensive, and fix a training, skills and education system that is expensive and mainly ineffective.

“A society in which there are ever-growing numbers of unemployed and excluded young people with no stake in or prospects for the future,” said Bernstein, “cannot expect to remain peaceful and democratic.”

• Report: South Africa’s NEETs crisis: Why we are failing to connect young people to work