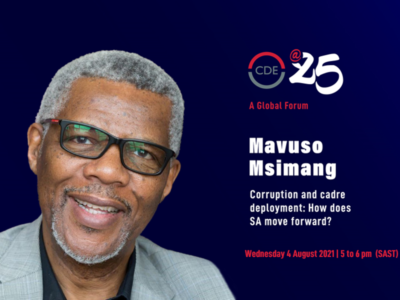 Mavuso Msimang is the chairman of Corruption Watch. Former director general of the Department of Home Affairs and CEO of SA National Parks, the State Information Technology Agency and SA Tourism, Mavuso is recognised for his experience in transforming and restructuring institutions. He is a senior member of the African National Congress and served on the MK Military High Command from 1966 to 1969, before being appointed secretary to ANC President Oliver Tambo. He sits on the board of the Peace Parks Foundation. See his bio here.

Mavuso was in conversation with Ann Bernstein, CDE’s executive director. The conversation focused on the question Corruption and cadre deployment: How does South Africa move forward?