We need to build cities of hope, not more houses in the veld

SA’s future is urban, and now is a good time to ask your political party how it plans to manage and encourage cities’ growth .

As the 2019 elections approach, there has been too little debate on the policies that political parties are offering the electorate. At this time of multiple crises and challenges, voters should engage parties on how they intend to improve the quality of life and expand opportunities for all South Africans, especially the 50% of the population who are poor.

SA’s future is urban. How do political parties propose to manage urbanisation and expanding city growth? How do we create cities of hope? No country that has become rich has done so without urbanising. Cities enable social prosperity by generating economies of scale in the provision of infrastructure and public services.

South Africans continue to move to urban areas, and cities’ young populations grow fast. The country is nearly 70% urbanised today; in 1994 only 50% of the population lived in urban areas. Many of these areas remain poor, but even the least developed towns offer more prospects to their residents than do large swathes of our rural areas.

Too many South African policymakers are still “reluctant urbanisers”, believing that people would be better off staying in rural areas and that it is the government’s job to bring opportunities to them there. Human history shows that this is certain to fail.

Apartheid left behind urban sprawl and weak urban connectivity, with poor residents on the urban periphery, far from employment and economic opportunity. The result is costly and inefficient public transport systems.

Some 3 million to 4 million “RDP housing opportunities” have increased the housing stock, but the policy has reinforced urban sprawl and disadvantage because houses have often been built on cheap land on the outskirts of cities. The challenge is to build cities, not houses in the veld, and to overcome the apartheid spatial legacy, not replicate it.

Here are the essential priorities for achieving inclusive urban growth:

The key issue facing voters is how to better manage our cities so they become platforms of opportunity rather than poverty.

This is what we need to know from the politicians:

Growth is a city story. If the economy is to grow more rapidly and create mass employment this can only happen in our cities. Faster growth will only happen if private investors are encouraged to find new opportunities in our cities, and are given the space and support to establish successful businesses.

South African cities perform poorly with respect to the costs of starting a business when compared to many others including other African cities . This pushes investors towards cheaper locations. And in repeated surveys business managers have identified crime as a major constraint on investing in a new business and on expanding existing businesses.

The idea of “township economies” has attracted a lot of attention, but policymakers need to ask whether the benefits of this are greater than what can be achieved by seeking to integrate townships better into the urban economy. The positive impact of growth in the wider city economy and opportunities for black entrepreneurs in the entire city far outweigh any benefits township specific programmes might deliver.

Cities must place jobs and growth at the heart of urban strategy. In many places this will require the establishment of local growth coalitions involving city politicians, the government and business. For example, if we want Johannesburg to be the continent’s financial centre, a coalition of national and urban interests needs to promote this.

Before you vote on May 8, ask the political parties these questions about cities, growth and jobs. And demand answers. 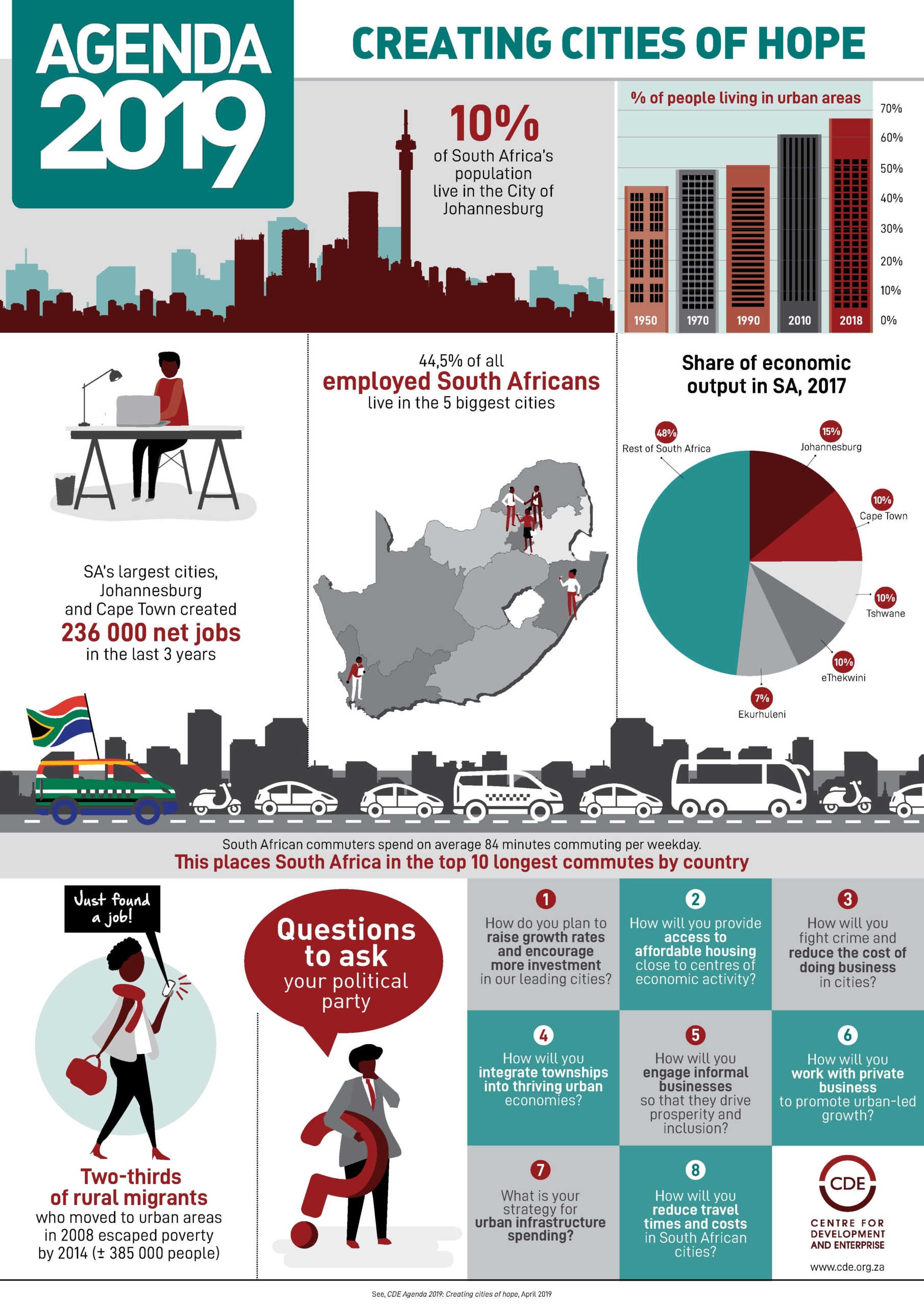