CDE Conversations | Edward Luce on Can things get any worse in America? 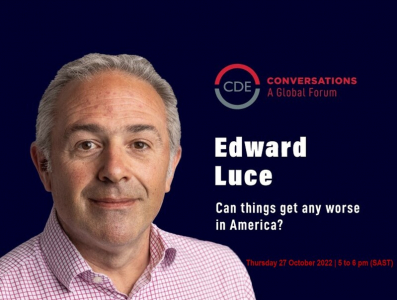 Edward Luce is the US national editor and a columnist at the Financial Times. He was previously FT Washington bureau chief, South Asia bureau chief, capital markets editor and Philippines correspondent. He has published three highly acclaimed books and is recognised as a leading authority on India, globalisation and the future of the West, China and the United Kingdom in addition to American issues. See his bio here.

Ann Bernstein, CDE’s executive director was in a conversation with Edward. The conversation focused mainly on the United States in the lead up to the US mid-term elections taking place on 8 November 2022, as well as foreign affairs, India and other global issues.