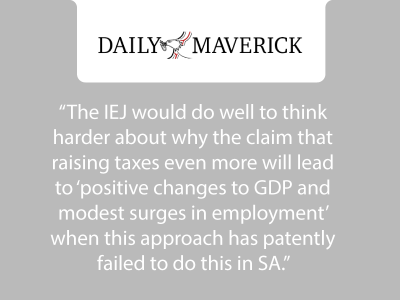 For the richest 10% of South Africans — 3.5 million people — to pay the cost of a basic income grant, their taxes would rise from 33% of their income to nearly 50%. Their average disposable income would effectively fall from R25,000 per month to about R18,500.

On 12 June, the Sunday Times published an op-ed, “Magical thinking about the BIG question does more harm than good”, which I had written about proposals for a basic income grant (BIG). In it, I argued that, dire as South Africa’s poverty statistics are, a BIG of any meaningful size was unaffordable.

South Africa’s public finances are in a dreadful state. The level of debt to GDP is high and, because we have not yet been able to bring spending into line with taxes, it continues to rise rapidly. Implementing a BIG in these circumstances, I argued, meant a further deterioration in SA’s economic prospects: if we borrowed more money to fund a BIG, our public finances would deteriorate, interest rates would rise and growth would slow; on the other hand, if we raised taxes to fund the BIG, economic growth would slow, SA’s creditworthiness would decline, and interest rates would rise. Proponents of a BIG either ignore these risks or dismiss them.

As if to prove my point, a week after my op-ed appeared, the Sunday Times published a response authored by three researchers at the Institute for Economic Justice titled, “Poverty is unaffordable, there’s a BIG way out”. Modestly describing themselves as “a progressive think-tank that provides rigorous economic analysis designed to arm policymakers and the public with progressive policy options to combat poverty, underdevelopment and inequality in SA, the region and the continent” but calling CDE a “lobby group funded by big business”, the op-ed’s authors seem to go out of their way to show just how little rigour they apply to their analyses.

Unfortunately, the Sunday Times has decided to close debate on this issue so we were unable to respond to the IEJ’s screed. Had they made a different choice, my response would have covered a number of issues.

How much would a BIG cost?

When CDE launched its report, “Poverty and a basic income grant: six questions about a BIG”, three weeks ago, we noted that proponents of a BIG had not coalesced around a clear position on the key parameters of a BIG (how many people would be eligible and how much each would receive). This made it impossible to know exactly how much it would cost, though we guessed it would come in at between R200 billion and R300 billion a year.

The IEJ’s response to my op-ed avoids this issue entirely, though it does say that it would only require a “slight” increase in taxes on the wealthy (about which, see below). Happily for us, however, the IEJ has made its position somewhat clearer in a press statement it released on 23 June, announcing its intention to sue government for the non-payment of (SRD) grants.

Our estimate of R200 billion to R300 billion, it turns out, was a gross underestimate.

In its 23 June statement, the IEJ says that BIG should be paid to “all in South Africa aged between 18-59”, that it should be implemented from April 2023 and “must be at a minimum, at the level of the food poverty line, rising over time to reach at least the upper-bound poverty line and effectively eliminate poverty in South Africa.”

What would that cost? Well, according to the IEJ itself, the food poverty line is about R620 per month. If we assume inflation of 6%, that means the grant will start at R660 per month in 2023. According to StatsSA, there are about 34 million people aged between 18 and 59 in SA. That means the BIG will cost nearly R280 billion in its first year. By the time it reaches the upper bound poverty line, however, it will cost something like R600 billion a year before adding inflation or the effects of a growing population of beneficiaries.

To put that in context: in 2023/24, government expects to raise a total of R1.6 trillion in taxes, so a BIG costing R600 billion would require an increase in taxes of about 40%. Even at the food poverty line, the IEJ’s proposal would add nearly 20% to government’s current revenue requirement.

How to raise some R300 billion in new taxes?

Having failed in its op-ed to provide any estimate of what a BIG would cost, the IEJ says that it would result in “slightly increased taxes on the wealthy”. Is that possible?

How should we think about adding nearly R300 billion to the tax revenue that government collects (which, as noted, is what is needed for the IEJ’s BIG in the first year, before the value of the grant begins to rise)? And is it possible to collect this tax through a slight increase in taxes on the wealthy, as the IEJ says?

The answers are obvious, actually. In this year’s budget, government estimates that it will collect R590 billion in personal taxes, R440 billion in VAT and R270 billion in corporate taxes. These three taxes make up the vast majority of revenue, so it’s impossible to see how government could avoid raising these taxes when it tries to find an additional R300 billion.

One way would be to increase VAT from 15% to 25%. The problem with that, from the IEJ’s point of view, is that using the VAT to raise the funds needed for a BIG means that everyone pays, not just the wealthy. It would also mean an immediate increase in most household costs of about 10 percentage points, eating away at the value of the BIG. So let us assume that the IEJ would resist using a VAT increase to fund a BIG.

Using personal income taxes is another possibility. These are expected to raise R590 billion this year, so a uniform increase of 50% in all personal taxes would do the trick. The result would be that the average rate of income tax paid by the average tax-payer would increase from around 22% to around 33%.

Of course, this approach would also fail to meet the IEJ’s stated goal of confining the impact of the BIG to the taxes of the wealthy. The IEJ does not say who it thinks of as wealthy but let us assume that they mean the top 10% of households.

According to a panel of experts convened by the Department of Social Development, there are 3.5 million people living in the richest 10% of households. Their average disposable income is about R25,000 per month, which means that their average pre-tax income must average around R38,000 per person.

For those 3.5 million people to pay the cost of the BIG in the first year, each would have to contribute, on average, about R80,000 a year. That would mean that their average disposable income would fall from R25,000 per month to about R18,500. In effect, their taxes would rise from 33% of their income to nearly 50%.

This, is what the IEJ deems a “slight increase” in taxes, about which CDE has no business using what they call “alarmist rhetoric”. To avoid repeating that supposed transgression, we will leave it to the reader to decide whether the tax increase they envisage is “slight”.

The IEJ make a range of woefully inaccurate and unsupported claims about CDE and its views. This is not the place to debate the reasons why they would prefer to describe anyone who disagrees with them as ideologically motivated rather than debate the merits of the argument. One reason may be that they know how weak their claims are.

Responding to CDE’s insistence that SA needs to focus on growth and jobs, for example, they write that a study by the International Trade Union Confederation, that is supposedly based on evidence from eight low- and middle-income countries, found that “progressive taxation used to finance social protection led to positive changes to GDP and modest surges in employment.”

CDE in fact supports both progressive taxation and the financing of social protection. But, as we point out in our report, SA already has the most progressive fiscal policies in the developing world and allocates a larger share of GDP to grants than any almost any other country.

Rather than berating CDE as ideologically motivated, the IEJ would do well to think harder about why the claim that raising taxes even more will lead to “positive changes to GDP and modest surges in employment” when this approach has patently failed to do this in SA.

Ann Bernstein is head of the Centre for Development and Enterprise. See CDE’s new report, “Poverty and a Basic Income Grant: Six questions about a BIG.”

Article published by the Daily Maverick