Consequences of a basic income grant 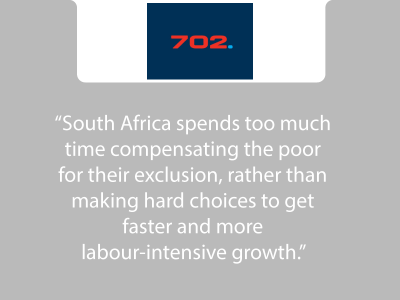 Speaking to 702’s Bruce Whitfield, CDE’s Ann Bernstein commented on the feasibility of a basic income grant given the current state of the economy. She argued, “Most of the proponents of a BIG do not consider the impact on the rest of the economy and the financial markets if South Africa were to suddenly raise its debt by millions.” She further touched on the fiscal crisis, higher taxes, and debt service costs.

This media interview is based on a new CDE report: Poverty and a Basic Income Grant: Six questions about a BIG