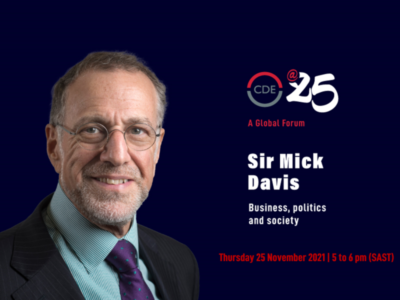 Sir Mick Davis, South African-born chairman of Macsteel, a global trading and shipping company, is an investor, director, and advisor to companies in the resource, technology, and financial services sectors. As CEO, he built Xstrata into one of the world’s largest mining companies with a market cap of over $60bn. He is a former treasurer and chief executive of the British Conservative Party, a former executive director of Eskom and served on President Ramaphosa’s Eskom Sustainability Task Team, established in 2018. He was knighted in 2015 for services to Holocaust commemoration and education. See bio here.

Sir Mick was in conversation with Ann Bernstein, CDE’s executive director. The conversation focussed on Business, politics and society.

Opening remarks were given by Sipho Maseko, chief executive officer of Telkom.