CDE @ 25 | Prof Ed Glaeser on Capitalism, Covid and the future of cities 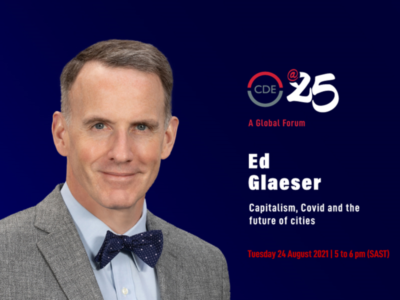 Professor Ed Glaeser is one of the world’s leading urban economists. He is the Fred and Eleanor Glimp Professor of Economics and newly appointed chairman of the Department of Economics at Harvard University. He views urbanisation as the best path to a country’s prosperity, cities as “working miracles of collaboration” and is particularly interested in the role that geographic proximity can play in creating knowledge, facilitating innovation and lifting millions out of poverty. His bestselling book, Triumph of the City popularised a way of thinking about cities, growth, crime and the housing market. He will publish his new book Survival of the City later this year. See his bio here.

Professor Glaeser was in conversation with Ann Bernstein, CDE’s executive director. The conversation focused on Capitalism, Covid and the future of cities.

Opening remarks were given by Monhla Hlahla, chairperson of Royal Bafokeng Holdings.