CDE @ 25 | Martin Wolf on the crisis of democratic capitalism 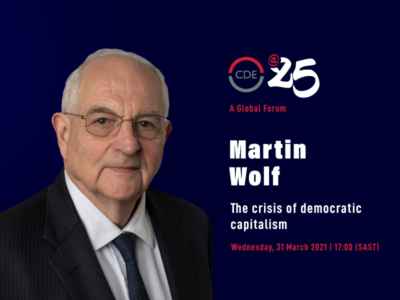 Martin Wolf is one of the most influential and respected commentators on economics, finance and political economy in the world. He is Associate Editor and Chief Economics Commentator at the Financial Times. In 2000 he was awarded the CBE, the Commander of the Order of the British Empire “for services to financial journalism”. See his bio here.

The conversation focused on Martin’s forthcoming book The Crisis of Democratic Capitalism.

Martin Wolf was in conversation with Ann Bernstein, CDE’s executive director. For 25 years CDE has influenced policy in South Africa’s democracy. We have established ourselves as a unique policy think tank and prominent public ‘voice’ promoting enterprise and development in South Africa and emerging markets. We have built a wide network throughout the country and with leading global experts and think tanks, especially in democratic developing countries.

Opening comments were given by Kuben Naidoo, deputy governor of the SA Reserve Bank