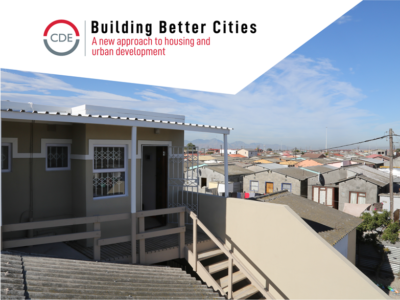 “This is far better than the current RDP housing policy, which mainly locates people far from economic opportunities and contributes to high rates of unemployment and poverty,” Bernstein argues.

This market-led approach is gaining traction across South Africa’s metros.

South Africans want to live in well-located parts of the cities, where jobs and economic opportunities are concentrated.

“For many, location trumps ownership. It is often far better to rent a property in Orange Grove, than to own a house in Orange Farm,” says Bernstein.

CDE is arguing that it’s time to think differently about housing and urban development.

An enormous opportunity exists to adopt a better approach by focusing on the densification of existing suburbs. There are currently four and a half million freestanding privately owned houses in urban residential areas across South Africa with tremendous potential for densification.

If this became an increasingly prominent mode for producing new, low-cost housing options for the poor, “we could reduce the demand for new land in the metros over the next 25 years by around 70%. “

Bernstein emphasised: SA needs to create cities of hope and inclusion: “it is vital that South Africa manages this phenomenon well. What the country needs are denser, vibrant, well-managed, low-income neighbourhoods and not inner city slums”.

To achieve that we need:

• To move away from housing subsidies for individuals.

• Metros to focus on areas for residential densification, to expand infrastructure and to strengthen urban management capacity.

• National government to provide metros with technical and financial assistance, permitting the provision of free service connections and the waving of development contributions.

The CDE report is product of a partnership between CDE and Matthew Nell from Shisaka, one of the country’s leading housing experts, and Paul Jackson, CEO of TUHF, which funds and supports new housing entrepreneurs.

ABOUT THE CENTRE FOR DEVELOPMENT AND ENTERPRISE The CDE is an independent policy research and advocacy organisation. It is one of South Africa’s leading development think tanks, focusing on critical development issues and their relationship to economic growth and democratic consolidation. Through examining South African realities and international experience, CDE formulates practical policy proposals outlining ways in which South Africa can tackle major social and economic challenges.