Why businesses do good just by doing what they do best 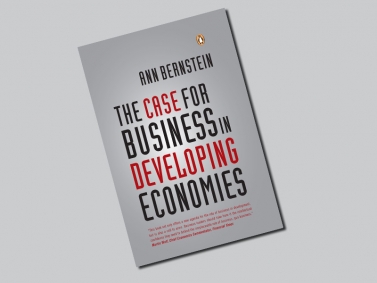 I do a lot of work looking at how business can be more effective in corporate social investment,” says Ann Bernstein, founding director of the Centre for Development and Enterprise (CDE).

“If I look at schooling reform, businesses spend something like R1,3bn on educational projects, but I have to ask what impact this has had on the schooling system in SA.” And she has to answer: “Very little.”

When researching her latest book, the internationally acclaimed The Case for Business in Developing Economies, which includes the chapter If Global Poverty is the Challenge, Corporate Social Responsibility is not the Answer, Bernstein studied “every speech across the globe” from major brands.

Not one of them was devoted to why business is good for society: “If lucky, there’d be an opening paragraph, then it would be a litany of all the schools they support, the clinics, the mentorship programmes, all the extras.”

Businesses, it seems, have become personal apologists for just being good at doing good business; and businesses have taken on a note of what Bernstein calls appeasement. Rather like battered women, if you’re told you’re bad long enough, you’ll start believing it.

“Businesses are talked about as if they’re immoral, but modern businesses, through just doing business, impact enormously positively on any society, but especially developing ones,” says Bernstein. “Yet there is a relentless barrage of criticism and demands to ‘account’ for what they do and ‘redress’ situations they didn’t create. So corporate social investment, particularly overseas, became a sort of movement to help business co- ordinate what were seen as ‘reparations’!”

Bernstein understands first-hand the power businesses have to change society. In the early 1980s she worked for the Urban Foundation, then the largest nongovernmental organisation in which English and Afrikaans business people worked together, and which had “very senior black members on the board”.

At the foundation she designed and ran the campaign for the abolition of influx control, which was the linchpin of apartheid. “Long before apartheid ended, big companies acknowledged and negotiated with trade unions. Companies became zones of liberation — not because they were altruistic, but because their business means treating people as valued and equal. It was, and is, in their interest to do this.”

This doesn’t make businesses “evil”; as Bernstein notes, Oxfam has an interest in its own survival: “Yet there is this notion that just by being a nonprofit organisation you are somehow pure and more moral than a business doing its job well.”

Bernstein grew up politically in Helen Suzman’s constituency, worked for her in Parliament and became a friend. After studying at Wits she received the Ernest Oppenheimer Memorial Trust Fellowship and studied development in developing countries for two years in the US.

She started the CDE, “an independent policy research and advocacy organisation — essentially a policy think-tank”, in 1995, with just her and a desk. “There were no think- tanks in SA at the time, nobody was discussing liberal market principles or thinking about the very big challenges that would face a democratic SA.”

But not all countries are as democratic as the companies that do business in them. Part of Bernstein’s book is about the direct and indirect consequences of business.

“The modern business is the most powerful organisation ever invented for innovation, knowledge transfer and creating empowerment opportunities,” she says. “This is its direct impact on society. It is taken for granted, or overlooked, that businesses pay taxes, and create employment and wealth.

“The competitive element of business is what has driven, and drives, society forwards, but it is either not talked about or undervalued.”

She cites many regions, but particularly Asia, as a beneficiary of the direct impact business has: “In the last 50 years this area has opened up new markets and enterprises and more people have moved out of poverty more quickly than ever before, and in larger numbers.”

She explains the indirect impact businesses have with an example. “When companies went to China, interested in doing business, they became transmission belts of modernity into that society. Inside the factories were signs saying: ‘Your views count, speak out if you have problems at work.’ Outside may have been entirely undemocratic, but inside, people were told they were valued — by the company, if not the country.”

She remembers one black woman saying to her, during apartheid, that when she went to Pick n Pay, she was treated like a human being, an equal with the white shoppers. “That’s because they wanted her as a customer, but it made this woman think about why the rest of society couldn’t be the same.”

Bernstein maintains that something profound happens when successful businesses come to town, often due to the way modern, western companies treat their employees compared to some authoritarian regimes.

If a western company wants to list on the Shanghai Stock Exchange, for instance, they won’t do so unless there is a “reasonably free media” and they are able to report on what they do and how they do it reliably.

“Because of their interest in doing business, the laws of the company investing need to be closer to the rule of law, in a western sense. The process of implementing these corporate values creates what I once heard described as a ‘thickening’ of civil society. The company is contributing to better laws, civil society and independent institutions — all through simply doing business.”

Bernstein holds little truck with the antimarket forces and antiglobalisation protestors who put their considerable energy — and resources — into “brand jacking” multinationals.

When the protestors claim that (the admittedly not fabulous) factory jobs in some parts of the world are corporate exploitation, it is more likely ignorance on the part of the protestors. “These are often the best-paying jobs in town,” Bernstein says. “I would say to these protestors — who liaise on their cellphones, wearing their top-of-the-range running shoes and go back to houses with running water — that the evidence indicates the opposite of exploitation.

“Often it’s the best job people have ever had and after five to seven years, they commonly leave the factories and set up their own small service companies or go back to their rural roots, but now with money. And who are these protesters, representing rich, western society, to make a decision on some poor person’s life?

“Many adherents, including those of corporate social responsibility in the rich west, do not understand what poverty and such depths of poverty are really about, nor the choices people face. Nobel laureate Paul Krugman put it this way: The alternative to low-paying jobs is not high-paying jobs, but no jobs at all.”

Before anyone has the conversation of what more business “must and should” be doing, Bernstein says, the naysayers need to have a deep understanding of what business does, and what good profit- making contributes to society.

“Business and society are not separate. Business is a fundamental part of society and has an intense interest in society being successful. And the benefits of good business are more profound than funding preschools. There will always be a need for charity, obviously, but corporate social investment funds are very precious and should be used wisely. Often they’re a Band-Aid for bad government policy and corporates end up funding things the state should be doing.”

To business, Bernstein would say stand up for what you do and regain confidence, because “a better society is a side effect of doing good business”.

To critics of business, Bernstein says they don’t understand the profound good just doing business contributes to a good society. The consequence of constantly besieging business, of making it feel guilty for doing its job well, is to run the risk of companies upping sticks and moving on.

“We take the existence of business and its merits for granted. But we need the creativeness of competitive market processes, because that leads to innovation and risk, and that’s the only way for developing countries, especially, to move forward.”

The Case for Business in Developing Economies is published by Penguin Books, available at all good book stores.