What if South Africa had a special economic zone that was actually special? 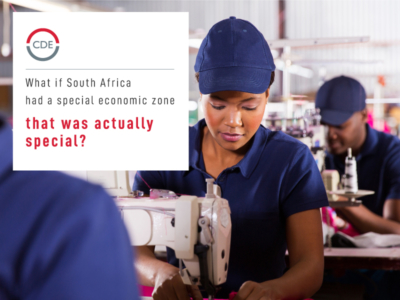 A new report by the Centre for Development and Enterprise (CDE) has called for the implementation of a special economic zone (SEZ) in the Eastern Cape focused on labour-intensive exports. To attract companies, the zone would offer a modified labour market regime, but companies that operated from the zone would have to sell all their goods in overseas markets.

CDE’s Ann Bernstein said at the launch of the report that “SEZs can play a critical role in helping to overcome political resistance to reforms that are needed to stimulate growth. Using an SEZ to experiment with reforms helps demonstrate that those reforms can have a positive impact. This is what Deng Xiaoping meant when he said that you cross a river by feeling for stones.

In the meantime, because the reforms only apply in the SEZ, you can overcome some of the resistance that would be felt if you went for a big bang of changes for the whole country.”

A number of prominent people and institutions have recently expressed support for an SEZ focused on labour-intensive production, among them the ANC, the National Treasury, Kgalema Motlanthe’s High Level Panel report to parliament and Nobel prize winning economist, Paul Romer.

The CDE report argues that SA has the deepest unemployment crisis in the world and that the 11 SEZs that have been established are not making a meaningful impact on this.

“SA has 11 designated SEZs,” Ann Bernstein, CDE’s executive director said, “but they are not very special because they do not provide investors with an environment that is much different from that which exists in the rest of the country.

“Essentially, they are nothing more than industrial and office parks in which the infrastructure is partially subsidised. They do very little to address any of the constraints on business, especially businesses that wish to produce the kinds of goods that create lots of low-skill jobs.”

SEZs, which have been used by various countries around the world to kickstart development, are specially designated areas in which host countries seek to create a business environment that will attract investment. They have been critical to the developmental successes of East Asia, where zones have been established to attract foreign firms with access to technology and business knowhow, and to build large export-oriented industries.

“Zones can be successful because they help put industrial development on an accelerated track,” says Bernstein, “allowing firms to become much more competitive, much more quickly than they would otherwise do.” But many zones fail because policy-makers do not ensure that they address the real constraints businesses face.

“It’s hard to believe that most South African firms would put subsidized office space and infrastructure at the top of their list of constraints.”

“Our unemployment crisis means we need to focus our reform energies on jobs,” says Bernstein. A zone that offered employers greater flexibility could demonstrate the extent to which those reforms might unlock rapid employment creation.

“Coega is ideal for this experiment,” says Bernstein. “The infrastructure already exists and is grossly underutilized, and it has easy access to a port.”

CDE says that the reforms needed for the experiment are not very deep: the minimum wage would still apply, as would general health and safety rules, but beyond that factories would negotiate conditions of service at factory, not sectoral, level. “Because everything that is produced in the zone would have to be exported, the businesses there would not be competing against local firms in the domestic market,” says Bernstein. “This should reduce resistance from unions and business.”

Labour-intensive manufacturing jobs have been the lynchpin of industrialisation throughout the world since the 19th century. They have been the key stepping stones for hundreds of millions of people to get out of poverty.

“For SA to succeed we need to move with speed, because automation means manufacturing will become ever less reliant on labour. This may be the last opportunity for developing countries to achieve meaningful numbers of new industrial jobs.

Let’s develop an SEZ that is actually special, “says Bernstein, “and let’s do it quickly.”