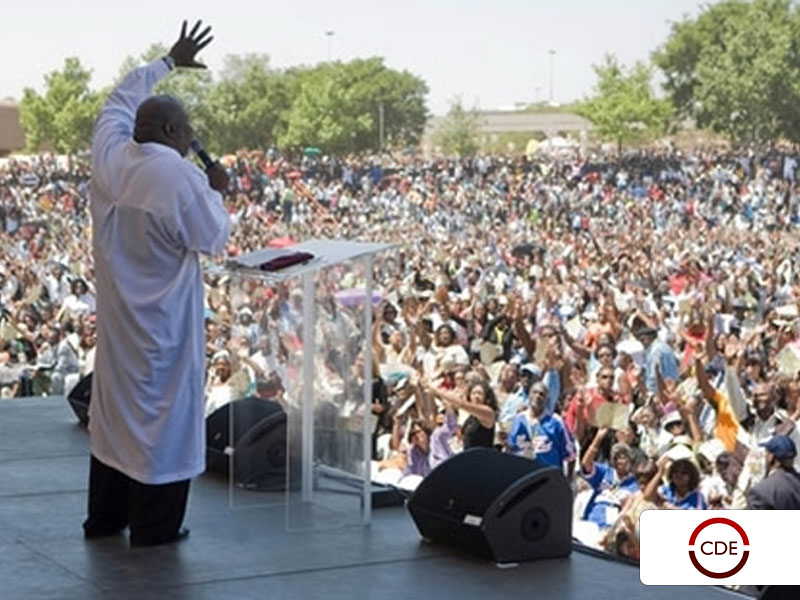 The rise of Pentecostalism in South Africa – already a predominantly Christian country – has unappreciated social and economic consequences, according to the Centre for Development and Enterprise (CDE).

Commenting on the a two-year study issued today, executive director Ann Bernstein said: “We have concluded that among the surprising and salutary findings unearthed by our research the most significant for South Africa’s development is the amount of untapped social capital available for development and economic growth hidden away in a social revolution happening under our noses.”

The 2001 census found that 80% of South Africans profess to be Christian, with one-third of these (12.5 million people) members of non-mainstream churches. Their numbers are growing fast, while those of conventional churches remain static. The fastest growing group of all – by 65% between the 1996 and 2001 censuses is that classified as Pentecostal. This is consistent with global patterns as Pentecostalism is the world’s fastest growing large religious faith.

South Africa’s population between the 1996 and 2001 census grew 10,5%. People identifying themselves as Christians increased 19%; members of Pentecostal and charismatic churches grew 55% – a figure which could be considerably higher since the same census records 3,2 million ‘other Christians’. If this rate of growth is maintained, South African Pentecostals will number almost 10 million by 2011, or one-fifth of the population.

The significance of this remarkable phenomenon, said Bernstein, is not confined to theology and worship. There is growing evidence – notably in Latin America and Asia – that the explosion of many different kinds of evangelical Protestantism is associated with attitudes, habits and dispositions that promote independence, entrepreneurship and development.

“Importantly,” she said. “Pentacostalism recognises and expands the role and contribution of women in society and the importance of education for children.”

Entrepreneurship and response to opportunity are central features of these churches. It’s notable that a larger number of Pentecostals than any other religious group have broken into the highest income bracket (or LSMs).

“South Africa should take note of this silent revolution and the likely connections between newly spreading and developing forms of religious belief, practices and organisations on the one hand, and the basics of economic growth – including work and enterprise, saving and spending – on the other,” advised Bernstein.

“Such social capital is not easily generated by government interventions and should be encouraged as a means to reach out to South Africa’s many marginalised and alienated communities.”

As suggested by Peter Berger, one of the world’s leading sociologists of religion and CDE’s international associate, the early Protestant ethic was typified by a disciplined and rational approach to work and social activity, including family life, along with a deferral of gratification and instant consumption. These habits promoted savings, capital accumulation and economic advancement. The nature of Pentecostalism, he argues, comes close to this model today.

Involvement in Pentecostal tends to breed feelings of self-confidence, self-esteem, and a sense of viability which find outlets in a more ordered family life, working life, and business activities, the study found.

The CDE also confirmed the studies of Pentecostals in Latin America and elsewhere which found that the potential economic and social virtues of Pentecostalism are discounted by the academic, political and media elites.

“Of course our study was by no means conclusive: we don’t know if the growth in number of Pentecostals will continue, nor can we tell to what extent the considerable social capital embedded in the movement be utilised for the benefit of broader South African society. But what is encouraging,” said Bernstein, “is the message conveyed by these various churches across the country to their adherent.”

The message is this: You can change your own life and improve your circumstance by your own actions. This is a very different message from what many have described as a growing sense of passive entitlement starting to spread in the country.

“They learn to participate in and run meetings to conduct business to handle money, to budget, to plan, to compromise, to formulate and ‘own’ a course of action.”

The CDE is not suggesting that everyone in South Africa should go out and convert to Pentecostalism. What we are saying, concludes Bernstein, is that there is a large, growing phenomenon in the country and its potential social and economic impact is positive. Whatever people’s religious beliefs policy makers – in both public and private sectors – should take note of what is happening.