The Siren Song of Localisation: Why localisation policy will not lead to industrialisation 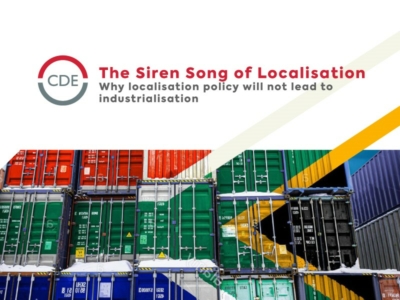 “Localisation will raise costs, reduce competitiveness and domestic competition. It is an anti-export strategy and the wrong priority for South Africa.” So said Ann Bernstein, executive director of the Centre for Development and Enterprise, at the release of a new report.

“Significant stakeholders in the economy – government, business and organised labour – have endorsed some version of the idea that localisation is essential for economic growth in South Africa,” Bernstein said. “But the strategy is misguided.”

The report notes that proponents of localisation see it as a driver of economic growth because demand for imported goods is redirected to local firms making the same products.

“This is a beguiling proposition,” says Bernstein, “but there is no such thing as a free lunch. While the Minister of Trade, Industry and Competition will tell you about the firms that did well as a result of localisation, he will never talk about the costs that are imposed on that firm’s customers and on all of us.”

Professor David Kaplan, a contributor to the report, agreed. “When products are designated for local procurement,” he said “it means they were not the buyer’s first choice. There must be a reason for that. Are they more expensive? Are they inferior in some way? There must be a cost to choosing the local product over the imported product, otherwise there would be no point to the localisation policy.”

Bernstein noted that sometimes products were designated for local procurement even though there were no local suppliers. “The CEO of Transnet, Portia Derby told Business Day recently that Transnet spends an inordinate amount of time trying to get permission from Treasury to buy imported rail tracks because no one makes them in South Africa.”

Professor Lawrence Edwards, another contributor to the report, noted that localisation reduced the incentive on firms to be efficient, keep prices down and innovate with new products or processes.

Protecting local firms from foreign competition and guaranteeing them the whole of the local market, creates a risk that “you end up supporting very inefficient firms.” He said this was an especially large risk in South Africa because industries are highly concentrated and there are few firms competing to supply any specific product.

CDE’s report criticises industry masterplans that have been championed by the Department of Trade, Industry and Competition, and by business. “These masterplans make numerous recommendations that would shield local firms from foreign competition, raising costs for down-stream users and for consumers.“

“Localisation is an exceptionally misguided strategy,” Ms Bernstein said. “It both reduces competition in the local economy and reduces exports.” South Africa is a big exporter of motor vehicles but it imports most of the parts that go into those cars. “In a world of complex, interlinked supply chains, you can’t reduce imports without reducing exports, too.”

“The country has been battling with stage four load-shedding over the past few weeks. Our problems are not the result of importing too much from the rest of the world. They are homegrown. Imposing local-content procurement rules is not going to fix them. In many respects localisation will make SA’s economic problems worse.”

“This policy should not be a key pillar of our economic recovery strategy,” said Ann Bernstein.