The Jobs Summit and the challenge of mass unemployment 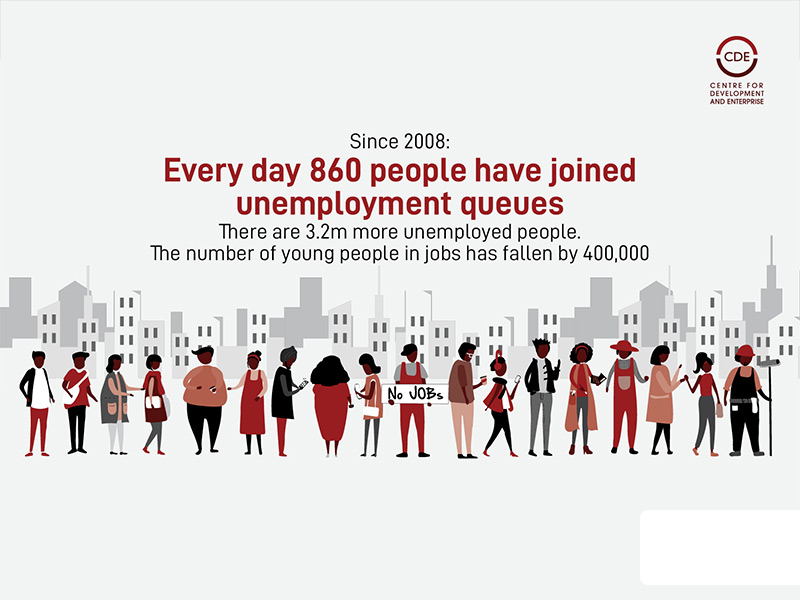 Johannesburg 26 September 2018 – South Africa’s crisis of unemployment is the deepest in the world, and the Jobs Summit, to be hosted next week, will be a wasted opportunity unless it begins to deal with some of the key structural constraints on employment creation. This is the view of the Centre for Development and Enterprise (CDE), whose executive director, Ann Bernstein, hosted a media briefing yesterday.

Ms Bernstein noted that too much energy goes into projects that can help move people closer to the front of the unemployment queue, and too little goes into the policy reforms that are needed to shrink those queues.

“Everyone knows that we have an exceptionally high level of unemployment,” Bernstein said, “but few people realise how rapidly our situation is deteriorating.” Since 2008 the adult population has grown by about 1,700 people per day, but the number of jobs has increased by only about 500 per day. “For young people the trend is even worse: there are fewer young people in jobs today than there were in 2008.”

CDE reports that only 43% of working age adults have jobs, a figure substantially lower than the global norm of around 60%. That low level of employment means that South Africa has a very high level of unemployment: 9.6 million adults who want to work cannot find a job.

CDE has looked at youth unemployment in 20 cities, towns and townships across the country. “When you talk to officials, politicians, young people, civil society or even business organisations in places where youth unemployment is very high, they often tell you that what they want to see is more public employment or better functioning labour bureaus or projects to train entrepreneurs,” she said. “What they don’t talk about are all the policies that stifle growth.”

“In our view, the most efficient, sustainable projects for creating jobs are called firms. But the policies needed to ensure their survival and expansion and the creation of many new firms are not what South Africans generally talk about. Hopefully the Jobs Summit won’t repeat those mistakes.”

CDE argues that South Africa’s approach to employment has failed because too many of the country’s policies raise the cost of doing business and reduce the economic growth rate. “Without growth, sustainable jobs won’t be created,” Bernstein says.

South Africa’s emphasis on building an economy that is high skill and high wage ignores the reality of millions of unskilled and inexperienced work seekers. “This is not just a plea for better spending in skills development,” said Bernstein. “We need an environment conducive to firms’ making and selling goods and services using the workforce we have, not the workforce we wish we had.”

If South Africa is to make progress, the country needs a bold reform agenda. We need to change the approach to collective bargaining so that work seekers and smaller firms are not priced out of the market; reduce the cost of employing young people, especially in comparison to older, more experienced workers; and reduce subsidies being paid to firms that are capital and skill intensive.

There are therefore, four questions to ask concerning the Jobs Summit agreements:

• Do the proposals respond to the scale of the challenge?

• Are they likely to improve the business environment for all firms and especially smaller and newer firms?

• Is the Jobs Summit agreement all there is? Or is this the start of a process of further engagement and reform on the more fundamental issues?

If the answers to these questions are positive, CDE would regard the Jobs Summit as a success.