Ten million and rising: What it would take to address South Africa’s jobs bloodbath 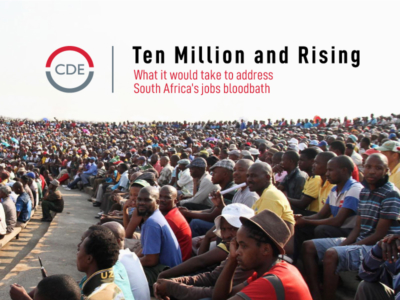 Launching the Centre for Development and Enterprise’s (CDE) new report on South Africa’s jobs crisis, executive director Ann Bernstein said, “The current approach to jobs is not working and a new deal is long overdue.”

In the report, Ten Million and Rising, CDE argues that the crisis of unemployment, which it describes as the deepest in the world, has worsened because government has failed to address its underlying causes: slow economic growth and labour market policies that discourage employers from hiring unskilled workers.

“Avoiding essential reforms,” argues Bernstein, “while focussing attention on ad hoc projects or special initiatives is not the answer.” Instead, the focus should be on “SA’s key task: designing, implementing and successfully managing a policy reform process.”

Only 42% of adult South Africans work, down from 46% in 2008. Across all upper middle-income countries (including SA) an average of 61% of adults are productively employed. Of the potential workforce over 38,5% is unemployed.

And the problem has been getting worse.

“The problem has been exacerbated by years of neglect and inappropriate policies,” says Bernstein, “but all is not lost. We could make significant progress in stimulating growth and increasing employment if government were to adopt a package of realistic policies.”

Bernstein set out the conditions for this to happen: “We have to grasp the depth and scale of the crisis, be honest about the causes and act with urgency to implement the necessary reforms.” She contrasted this to the impasse created by endless workshops, summits and Nedlac negotiations.

It is widely recognised that unemployment is high because economic growth is low.  Says Bernstein, “This is largely because governance has been so poor. Before 1994, apartheid was to blame; after 2008, state capture, increased antagonism towards business and widespread corruption precipitated a near-fatal collapse of governance.”  Three other factors are especially important: SA’s multi-generational failure to educate its workforce, the spatial legacy of apartheid which imprisoned many in poverty traps and retarded urban growth, and many bad policy choices in the last two decades.

”If we are to have any chance of turning this crisis around,” Bernstein said, “we will have to get the economy growing more quickly.” To do this, she said, we need a range of difficult but essential reforms.

These include: securing more generating capacity, putting SA’s finances on a sustainable footing, tackling the skills crisis through fundamental reform of basic education and training, as well as encouraging as much skilled immigration as we can attract. Policies that undermine property rights must also be rolled back, while government will have to rethink its attitude to business, the role of markets and the size of the state.

But, Bernstein warns, growth alone will not make for a job-rich economy: labour market reforms are urgent. These, she said, should be calibrated to avoid harming the living standards of existing workers while making possible the emergence of new labour-intensive activities that use lots of unskilled workers.

The best route to an inclusive society and less poverty is to get as many people as possible into formal jobs.

Reforms that would achieve this include: legal exemptions for small and new firms from collective bargaining agreements to which they are not party, while rebalancing collective bargaining to ensure small and new firms are better represented. The existing biases of industrial policy – which work in favour of capital-intensive firms – should be reversed, while the employment tax incentive should be expanded to include more workers and for a longer period. Making it easier for firms to get rid of employees during their probationary periods would help de-risk the employment decision.

Government has to change the terms of debate in the country: on how to achieve faster growth and on what is required to build a more job-rich economy.  The definition of “workers” in SA must include the unemployed: a low wage job is a better first step than no job at all.

“It’s time SA got serious about this devastating crisis,” says Bernstein.  “Tweaking around the edges of difficult issues or avoiding them will not result in faster growth or more employment.”

The CDE, an independent policy analysis and advocacy organisation, is South Africa’s leading development think tank. Since its establishment in 1995, CDE has been gathering evidence, consulting widely, and generating innovative policy recommendations on issues critical to economic growth and democratic consolidation. CDE has a special focus on the role of business and markets in development.