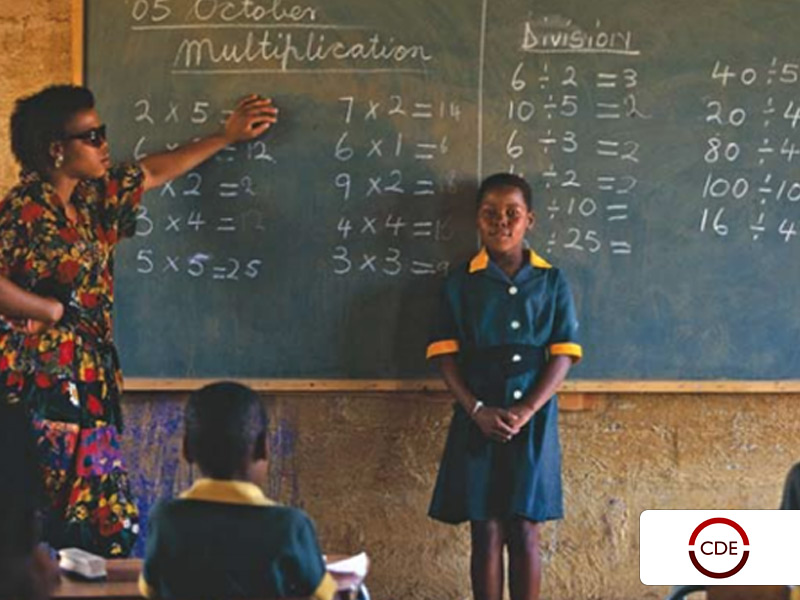 “From the president to the private sector, everyone wants to achieve the goal of doubling Senior Certificate Higher Grade maths and science passes (from about 25 000 to about 50 000) but we are nowhere near achieving this.

Annual passes in HG maths have fallen increasingly short of the Department of Education’s stated targets 2004-2008 for achieving the doubling goal, and from 2005 to 2006 they actually declined,” CDE Executive Director Ann Bernstein revealed.

In its second major privately funded research report on this topic, the Centre for Development and Enterprise concludes that profound changes are required as a matter of urgency if we are to see significant results. CDE called today for a priority national public-private project to turbo-boost maths and science education.

The package of measures – ‘doubling for growth’ – would align public and private efforts to dramatically reform maths schooling. The recommendations would see the government’s Dinaledi initiative become a national project – run akin to the autonomous South African Revenue Service – with a much increased budget and senior executive capacity.
The facts of poor performance are staggering, said Bernstein:

“Unless we get this right, the skills shortage will continue and deepen to the detriment of us all,” she said.

Everyone agrees we need to dramatically improve our maths and science performance starting at secondary school – indeed the recently released National Industrial Policy Framework identified technology- and knowledge-intensive growth as a priority. But thus far we are not getting it right.

CDE shares common concerns with the Ministry of Education: the need to affirm excellence and reject mediocrity, substantially improve performance, act against underperformance and act faster on agreed priorities. “In particular,” she added, “we share the Ministry’s desire for dramatically improved school results and strongly support the concept of Dinaledi schools.”

“The target of reaching 50 000 SC HG maths passes (or their equivalent under the new curriculum) a year needs to be achieved as quickly as possible. This can be done if more learners are persuaded to take the subject, and are able to attend good schools where it is offered.”

The CDE recommends a suite of initiatives for both public and private sectors.

The HG maths passes produced by Dinaledi schools have improved, but not nearly enough to achieve double maths and science passes — or their equivalent under the new curriculum — within the new few years.

The Dinaledi programme should be significantly strengthened and it should move beyond race and include all high performing maths/science schools and those with potential to become such schools.

The Department of Education should draw up a contract for each school clearly spelling out what the school must deliver and what the department must provide. These contracts need to be tightly monitored and schools that do not perform in a reasonable period should be removed from the programme thus making room for new schools eager to achieve.

To achieve ‘doubling for growth’, we must ensure effective teachers operate in functioning schools.

Immediately test all maths teachers to assess levels of performance – to teach maths in Grade 10 -12 teachers must be able to pass an exam equivalent to matric maths.

“We urgently need an audit of maths, science and language teachers to test competence,” said Bernstein. A similar exercise conducted in Peru earlier this year revealed that almost half of those who sat for the exam were unable to solve elementary maths questions, and a third failed a reading comprehension test.

Once we know which maths teachers can actually teach maths, remedial measures for the school and the teacher can begin. The school must immediately acquire the maths teaching expertise it needs; teachers who are not competent can be counselled and depending on results either redeployed to another level of teaching, another subject, sent for intensive training or moved out of teaching altogether.

The country needs to actively recruit qualified, experienced maths teachers with good English skills, from other countries like India or elsewhere and aim to have a large number ready for the new school year, January 2008.

“We believe government should act without delay to fill the new 2000 – teacher quota on the government’s list of foreign skills that can be imported. Every year that we delay affects the number of learners who could be getting a decent maths education, and thus the platform for a range of new opportunities for them and their families,” said Bernstein. An expanded quota is not sufficient, we need to get out and recruit the teachers we need as a matter of urgency.

Don’t ignore learners in the 81% of dysfunctional schools

Introduce an aptitude test for the learners sitting in a school (5703 schools, or 81%, achieve less than one HG maths pass, on average) which is dysfunctional re maths. Those learners with potential for maths should be moved to a good school so they have a chance of passing HG maths. This will require bursaries, support to learners in the new environment, support to receiving schools.

To achieve the doubling goal we need more learners to study maths. Government must identify learner talent to expand the pool of potential HG maths candidate and direct it to appropriate schools. The CDE therefore repeats its call for a national voluntary aptitude test at the end of Grade 7 so that all learners with an aptitude for science and maths can be identified and placed in appropriate schools.

NEW CAPACITY IN THE DEPARTMENT

Bernstein said: “To make this multi-million rand intervention work, the department will need considerably enhanced capacity and resources devoted to ‘the doubling project’. Experienced professional management, communication, negotiation and monitoring skills are essential and we strongly recommend the successful SARS model for consideration.

“Government and private companies are still some way from aligning their efforts, resulting in wastage of resources and proliferation of initiatives that are too small to have meaningful impact,” she explained.

The private sector has a profound interest in an improved maths and science schooling system. The absence of high-level skills is significantly constraining its ability to expand the economy and meet its black empowerment targets.

CDE poses tough questions for private companies and foundations willing to get involved in maths and science schooling. Ad hoc, well meaning but isolated projects are not working. The private sector should not perform the state’s role but use its money as social risk capital. A number of ideas are put forward for private sector support to strengthen the doubling initiative overall.

“In economic terms, we have reached the limits of our human capital. It can only be replenished by appropriate and successful education and training; and importing skills from abroad to meet the immediate shortfall,” said Bernstein.

She said a bold, system-wide, and well-resourced initiative that creates appropriate incentives has a chance of surmounting the challenges we face.

Dinaledi was introduced in 2001. The experience of this programme indicates that doubling will be hard to achieve.

“Without the essential measures CDE is suggesting, we see no realistic possibility of improving the output of our schooling system. We need to double as quickly as possible. After all this is only the first step in overhauling a failing education system which needs to be fixed from primary schools upwards in time.”