Running out of Road: South Africa’s public finances and what is to be done 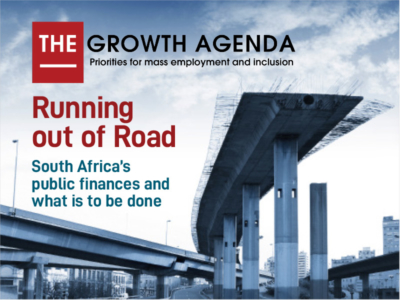 Over the past decade SA growth has been exceptionally disappointing and this has been accompanied by an astonishing build-up of public sector debt. Slow growth drove the rise in debt, which has now reached a point at which its weight is slowing growth.

This is the key conclusion of a new report titled Running out of Road: SA’s public finances and what is to be done, released earlier today by the Centre for Development and Enterprise.

Ann Bernstein, executive director of the CDE says: “SA is in a profound and deepening economic crisis. The country’s public finances are increasingly precarious, its macroeconomic fundamentals increasingly unsound, and the path we are on is increasingly unsustainable.”

“It does not appear that government and the ruling party fully grasp the depth of the changes required, or how much leadership it will take from the president to get this done.”

South Africa’s government and State Owned Companies (SOCs) have outstanding debts of over R3 trillion, that is almost four times higher that it was in 2008 and 15 times higher than in 1992. As a percentage of GDP, debt now exceeds 60% – as high as it was at the end of Apartheid.

CDE’s analysis shows that the main reason for the debt explosion is that in the aftermath of the global financial crisis in 2008, a large gap opened up between government spending and its revenues, and that gap has not closed in the intervening years.

Says Bernstein: “Spending plans have been woefully slow to adjust to slower growth, and the result is large, persistent deficits, leading to vast borrowings. “

State capture, widespread corruption, poor governance, incapable leadership, and ill-designed procurement policies all mean that much, even most, of the borrowed money has been wasted.

Bernstein argues: “We have spent hundreds of millions of rands on power stations that do not produce power and scores of billions on trains that never arrive – PRASA in spite of spending billions on modernization, is transporting 60% fewer people than it did a decade ago.

This year’s budget estimated that between 2015/16 and 2021/22, government and the major SOCs would borrow almost R2.2 trillion – or R1 billon a day, every day for seven years.

Says Bernstein: “We cannot afford what we already do. There is no room to increase the list whether for new smart cities, NHI or substantial numbers of police officers.

Our situation requires a tough choice of priorities for expenditure and ferocious determination to stick to these.”

Recommendations:   The report’s recommendations include that SA must continue to rebuild vital institutions, based on the rule of law. “Real progress has been made on this front although much more is required. However, the debate about expropriation without compensation and the nationalisation of the Reserve Bank have set this back.”

CDE argues the entire SOC sector must be rethought. Those entities whose finances are in a mess must be forced to address the high level of operational costs, failing which bailouts will have to be repeated endlessly. Some SOCs must be allowed to fail because they are not competitive and, as an indication that budgets are hard. Individual markets should be liberalized to increase competition and the private sector allowed to play a larger role in providing efficient, affordable services.

State expenditure must be cut. Over the past decade public sector wage increases have grown by an average of nearly 11% per year. This trajectory must change.

“But,” says Bernstein, “SA cannot solve its fiscal crisis without prioritizing growth.” We need a tough-minded growth strategy that is vigorously implemented. That means fixing public finances, but also requires decisive action on grasping the nettle on basic education reform and opening up to foreign skills, providing reliable, affordable energy, changing the labour market to create a more labour intensive economy, and fixing the attitudes and regulations that hold business back”