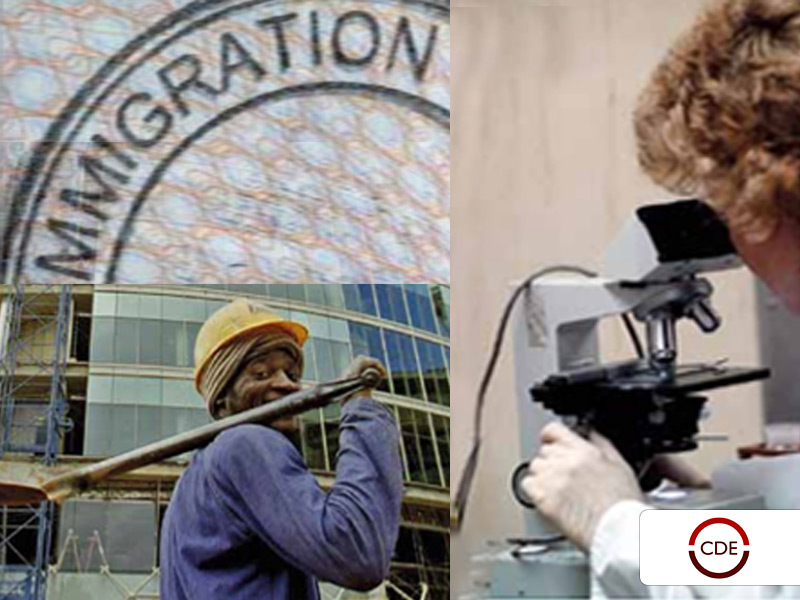 The Centre for Development and Enterprise (CDE), a leading SA policy research institution, has called on the government to open the country’s doors to very large numbers of skilled immigrants.

Ann Bernstein, CDE executive director says, “Higher economic growth will not happen without a rapid infusion of skills. This is the only way to relieve SA’s growing skills crisis in the short to medium term.”

This is the main recommendation of CDE’s new report on SA migration policy entitled, SKILLS, GROWTH AND BORDERS: Managing migration in South Africa’s national interest, released in Johannesburg this week.

According to the report, SA almost certainly lacks more skilled people than the Department of Labour’s estimated half a million. Its domestic skills production system is ‘grossly inefficient’, and will take years to reform.
The only way to access the large numbers of skilled people essential for higher economic growth, relatively quickly is through immigration.

While opportunities abroad lure away many skilled South Africans, the global market for skills could be used to recruit skilled people from elsewhere. “We should stop playing victim in the global war for talent, and start to compete,” says Bernstein. “SA’s migration regime has consistently failed in this respect.”

According to the report’s authors, government has been promising to make it easier for skilled immigrants to enter the country for more than ten years. Bold reforms are now urgent if South Africa is to grow more quickly.

“Everywhere in the world, countries are seeking to attract skilled immigrants,” says Bernstein. By contrast, SA’s skilled migration regime is ‘poorly conceived, narrowly based and ineffective’.

The report notes that the system governing corporate and intra-company work permits is functioning better than it once did, but the quota system – through which skilled migrants could enter the country without a job offer – is almost entirely unused. In 2008, some 36 000 permits were made available for skilled foreigners to enter the country without a job offer, but only 1 133 were taken up. This, at a time when the Department of Labour has estimated the skills shortage to be more than 502,000.

“The key priority,” says Bernstein “must be to attract very large numbers of skilled foreigners from wherever we can find them in the developed and developing world. In a country desperate for skilled people, spending effort on predicting the precise skills needs of a dynamic market economy is a complete waste of time and money.”

South Africa needs an immigration policy aimed at recruiting ‘very large numbers’ of skilled people. “We need a policy that welcomes, with an absolute minimum of conditions, anyone with skills,” says Bernstein. “This must include entrepreneurs and not just those who have millions to invest, but proven smaller entrepreneurs.”
“We must go beyond filling existing skills gaps in large companies. We urgently need immigrants to revitalise our faltering public health, education and skills production systems, and to boost innovation and entrepreneurship,” concludes Bernstein.

This media release is based on the following CDE background resource document,| SKILLS, GROWTH AND BORDERS. Managing migration in South Africa’s national interest.