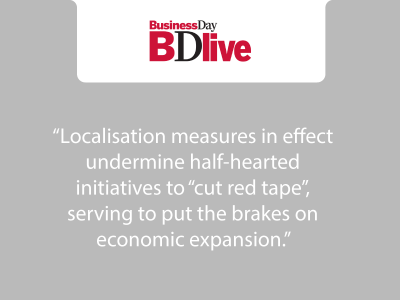 Policies reinforce the dominance of incumbents and raise prices

The idea of shifting demand away from imported goods in favour of those made in SA is an alluring one. Localisation policies are seductive: the promise of an upswing in employment and economic growth at a time when both are desperately needed. However, the government is gradually being forced to backtrack from its much-touted localisation policies because of their damaging consequences.

Localisation policies — preferential procurement policies, local content requirements, higher tariffs and import duties — have been central to the government’s 2020 economic recovery plan, building on a deep, long-running strain of protectionism in SA policy. Yet in August trade, industry & competition minister Ebrahim Patel signalled a retreat when he announced that, under bid window five of the Renewable Energy Independent Power Producer Procurement Programme (REIPPPP), local content requirements would be reduced from 100% to 35% to help resolve the energy supply crisis.

More back-pedalling came when the department suspended, for 12 months, import duties on chicken products from five countries to ease food inflation. As recently as May the minister had rebuffed calls for these tariffs to be removed, calling it an “extreme” step that would destroy local jobs. This two-fold retreat from an all-encompassing government commitment to localisation is significant — it is in effect an admission that localisation carries costs too heavy to bear.

In November 2021 the Centre for Development & Enterprise (CDE) released a report, “The Siren Song of Localisation”, arguing against the protectionism inherent in localisation policy. Two leading economists contributed to the report. Prof David Kaplan pointed to the costs of designating goods for local production. “If they have to be designated, it means they were not the buyer’s first choice. There must be a reason for that. Are they more expensive? Are they inferior in some way? There must be a cost to choosing the local product over the imported product, otherwise there would be no point to the localisation policy.”

Prof Lawrence Edwards highlighted how localisation reduces the incentive for firms to keep prices down and innovate. Protecting local firms from foreign competition and guaranteeing them the whole of the local market creates a risk that “you end up supporting very inefficient firms”.

In response, Patel asserted in parliament, without any evidence, that “millions of South Africans joined him” in rejecting the CDE’s report. President Cyril Ramaphosa, meanwhile, “encouraged and welcomed” our work, but insisted that the government’s “localisation efforts are on the right path”.

The CDE’s concerns have increasingly been echoed by industry leaders. Then RMB CEO James Formby made it clear that localisation requirements were holding back our ability to produce alternative energy. In April, Formby complained about local content rules increasing the cost of wind and solar energy installations. He went on to argue that tariffs on imported steel have a similar effect.

Energy expert Chris Yelland pointed out that under the REIPPPP, “local content designated by the [department] for plant and components … is proving to be significantly unrealistic”. Investec CEO Richard Wainwright similarly warned that in certain sectors “requests for local content are impractical”, and Business Leadership SA CEO Busisiwe Mavuso noted that “there is not nearly enough production capacity in SA to meet the requirement for solar energy components”. Imports are urgently needed.

The government’s recent retreat on localisation is therefore a welcome development. It shows that it is possible to influence government policy if the facts are on your side and enough pressure is brought to bear. Sadly, Patel and others still cling to their commitment to localisation in spite of its added cost on doing business or providing services. He has said further reductions in local content requirements would be reviewed only in the event of “further supply challenges”. It is difficult to imagine what more evidence of supply challenges are needed than stage 6 load-shedding.

Critics of the CDE’s report have accused us of ignoring the long-term benefits of localisation. They frequently concede that localisation raises prices at the time of implementation but maintain that these costs are offset by the local jobs and firms they save from bankruptcy, and the overall growth benefits they generate over the longer term.

It is not just the government that holds this view. Some captains of industry — the Manufacturing Circle CEO and the CEO of Proudly South African among them — are strongly committed to the idea that localisation will have long-run benefits that outweigh short-term costs. They regard localisation as necessary to stop the economy from shrinking. Saving local jobs and firms, they argue, will be followed by “multiplier effects”, thereby generating economic growth.

How should we think about the potential growth effects of localisation policies? One possibility is that localisation supports “infant industries”. The idea is that anticompetitive measures give young, smaller firms time, space and market access to build up capabilities and know-how. The worry is that without protection local industries will be outcompeted on price and/or quality by imports, and local economic development will be held back.

This could be a plausible argument if the SA situation was different. In this country the firms receiving state protection are mostly not new entrants trying to find their feet; rather, they are well-entrenched incumbents such as Sasol and ArcelorMittal. These firms wield enormous market power in their respective industries. If after many decades of protection, they are still not able to compete with foreign firms, there is no reason to believe they ever will. Quite the reverse: more protection is likely to further strengthen the dominance of large, incumbent firms, leading to an even more concentrated economy with low levels of competition.

Requiring firms to purchase more expensive and/or inferior inputs raises the cost of doing business. Ramaphosa has repeatedly talked of the challenge of doing business as a serious growth constraint that will be addressed. He does not appear to see the contradiction. Localisation measures in effect undermine half-hearted initiatives to “cut red tape”, serving to put the brakes on economic expansion.

Most importantly, raising the costs and lowering the quality of goods has a negative effect on the country’s ability to compete in export markets. Inefficient firms with a captive market have little incentive to become more productive and grow. This cuts the country off from a major engine of economic growth: increased production of goods and services for export markets.

Localisation cannot, therefore, be redeemed by its benefits. To chart a new course, we need many more local firms with the capacity to grow and create jobs. Such firms need large, dynamic markets in which to expand. Markets of that description exist almost exclusively outside our borders.

SA should urgently abandon the siren song of localisation as a developmental strategy. Instead, we need to focus our efforts on implementing reforms that will make domestic firms more competitive, both at home and in global markets.

This op-ed is based on a CDE report “The Siren Song of Localisation: Why localisation policy will not lead to industrialisation“