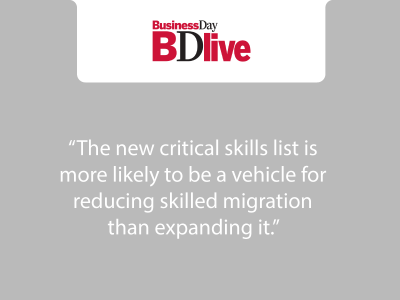 The government has found reasons to exclude more and more categories of skilled people from the list, leaving 101 identified skills as ‘critical’

Since at least 2014, Harvard professor Ricardo Hausmann has been telling SA audiences that technology is the driving force of productivity growth and prosperity, and that it is the reason human beings in the 21st century produce so much more than their genetically identical Neolithic ancestors 12,000 years ago.

All three kinds of technology are important, but it is knowhow that is most important. People with the right knowhow understand which tools and recipes they need, which of them to use in any given set of circumstances, and how to use them most effectively. Knowhow is the secret sauce of technology.

It is also the element that is most difficult to acquire: tools can be moved from place to place and from person to person, and recipes can be read in books and on the internet. Knowhow, on the other hand, is embodied in a human brain and cannot be transferred without the whole human coming along too.

The implication of this is dramatic. If a country wants to progress, if it wants its per capita levels of output and income to rise, the technologies to which it has access have to advance as rapidly as possible. It might buy a lot of capital goods, and it might send lots of kids to school to learn to read all the recipes in the world, both of which are good and necessary steps.

But it also needs its working population to gain knowhow. Most of this will be acquired through learning-by-doing, of course, but the process can be accelerated by allowing more foreigners who have already acquired knowhow to come to the country.

The process of reviewing the old list, so we had been led to understand from listening to the speeches of the president and finance minister, and from reading the documents they both put out, was supposed to help open up SA’s rigid, restrictive skilled migration regime. The goal, we were told, was to make it easier for skilled, knowhow-bearing individuals to move to the country.

Yet, nearly five years after the white paper on immigration policy acknowledged that “the economy is desperately short of skills”, the new critical skills list does little to address the problem. If anything, it is more likely to be a vehicle for reducing skilled migration than expanding it, since it incorporates a major policy change effected by the home affairs minister in what looks to us to be something of an abuse of his authority.

The Centre for Development and Enterprise has previously criticised the approach to skilled immigration adopted by the SA government. A developing country desperate for growth, innovation and knowhow cannot have too many skilled people. If SA is to err, we should let in more skilled immigrants rather than fewer. Government’s approach does the opposite, seeking to specify as closely and precisely as possible the kinds of skilled professionals we want to allow in, and to deny everyone else access to our labour market.

Until the last round of legislative changes in 2011 this was given expression in the “quota work permit” system, under which government published a list of skills along with a maximum number of potential visas that might be issued in each category. The list was supposed to be updated “at least annually”. It set out a list of job descriptions and qualifications deemed to be in short supply, and, in principle, employers could recruit foreigners who had those skills to whom home affairs would issue visas up until the quota limit was hit.

In practice, the list was almost never updated and the quota limits were never reached. However, this was not the system’s biggest flaw. That lay in an approach to skills planning based on the ludicrous premise that an economy in desperate need for growth should pick and choose what kinds of skilled immigrant it should allow in. Instead, as Hausmann would have told us, we should have been rolling out the red carpet for anyone with a modicum of desirable knowhow.

The 2011 amendments to the Immigration Act changed the approach, making the system, in principle at least, a little more open. The “quota work permit” was done away with, and in its place a “critical skills visa” was introduced. The crucial innovation introduced by the reform was that people with these “critical skills” would no longer need job offers before coming to SA. Instead, they could apply for a permit and then spend up to 12 months looking for a job in the country.

The identification of which skills are critical remained as absurd as it had been, but at least it meant that once a skill was deemed to be critical and in short supply, qualifying foreigners could come to the country without a job offer. Nor was there a maximum number of qualifying immigrants.

Moderately positive though the change was, it is, unfortunately, impossible to know whether this change had a meaningful impact on migration flows. We know from home affairs’ annual reports that a few thousand people would apply for critical skills permits each year, and that a high proportion of those applications would be processed within the department’s self-imposed time limit. But we have no idea how many permits were actually granted. Those numbers are simply not reported.

All of which brings us to January 2022 and home affairs issuing a revised critical skills list. Advertised as a key reform necessary for the president’s growth strategy and one of Operation Vulindlela priorities, the list was supposed to make it easier for the country to attract skills. In fact, it does the opposite.

The list of skills that has been gazetted is shorter and less inclusive than the draft list that was issued for public comment a year ago. In the intervening months, it seems government and its “social partners” have found reasons to exclude more and more categories of skilled people from the list, leaving 101 identified skills as “critical”.

That is bad enough. Worse was contained in an accompanying directive issued by home affairs minister Aaron Motsoaledi, in which he decreed that: “A critical skills visa is a work visa. The department will no longer issue a 12-month visa to applicants who have not secured or received an offer of employment. All applications in terms of the new 2022 list must be supported by a solid offer of employment.”

And, just like that, any pretence that the latest reforms represent an opening of the migration system collapses.

Bernstein is executive director of the Centre for Development and Enterprise.