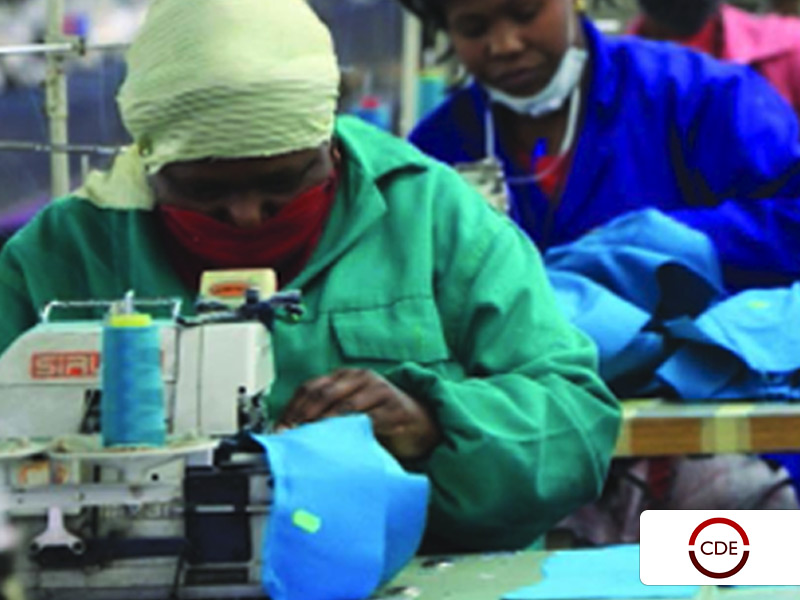 Today, five small Chinese firms in Newcastle, a low wage region in KZN, are in court to challenge the Minister of Labour and the National Bargaining Council for the Clothing Manufacturing Industry (NBC) on their right to extend minimum wage agreements agreed by NBC parties to non-parties. At stake is the survival of 450 firms nationwide, employing around 16 700 workers.

The NBC, which is backed by the South African Clothing and Textile Workers Union (Sactwu) and one of the key employer bodies in the industry, has closed down and attached the assets of companies that do not comply with the terms of agreements reached at the NBC if these are extended by the Minister of Labour, potentially putting thousands of people out of work.

To coincide with this landmark case, the Centre for Development and Enterprise is releasing a new report by Professors Nicoli Nattrass and Jeremy Seekings of the University of Cape Town. The CDE publication, JOB DESTRUCTION IN THE SOUTH AFRICAN CLOTHING INDUSTRY: How an alliance of organised labour, the state and some firms, is undermining labour-intensive jobs, chronicles the events that have led to the Pietermaritzburg High Court and why the future of South Africa’s low-wage manufacturing industry, depends on its successful outcome.

“The struggle of the Newcastle clothing producers to remain in business is symptomatic of the difficulties involved in promoting labour-intensive growth in South Africa,” says the CDE.

According to Ann Bernstein, executive director of CDE: “This report is a stark indictment of the current approach to collective bargaining and the government’s exclusive high-wage, high-tech strategy that ignores the reality of millions of South African work-seekers with little or no skill who desperately need jobs. If the country is serious about increasing employment, we must stop destroying jobs and deal with the contradictions in current policy.

“The Newcastle case is very important. Chinese- South African entrepreneurs are an asset for the country. Their factories point the way to how this country could encourage more industries providing employment for low skill workers. South Africa can compete with Asia.”

Professor Nattrass says: “This report puts paid to the argument that bargaining council agreements that are extended to non-parties by the Minister of Labour do not cost jobs. The imposition of a minimum wage – suitable for high wage firms at the top end of the industry – has seen the closure and relocation outside of SA of some low-wage manufacturing operations. This is the direct result of an alliance between the state, organised labour and some firms in the sector.”

“Allowing low-wage producers in places like Newcastle to continue to exist will not harm jobs in the upper-end of the industry. Instead it will accommodate the needs of lower-skilled workers, the unemployed and poorer consumers who purchase basic clothing goods rather than the pricier, branded fast fashion products.”

“The loss of jobs in Newcastle’s clothing factories will impact on the viability of other businesses in the community, and may result in even more job losses” according to the CDE report.

Raising minimum wages in labour-intensive industries, that have to compete against firms in low-wage countries like China and Lesotho, affects profit margins that are already tight.

Bernstein said that the “commitment to a ‘decent work’ agenda means the imposition of labour and industrial policies that make labour-intensive production all but impossible. These policies prevent South Africa from dealing with the challenge of mass unemployment.”

According to the report, the National Bargaining Council is composed mainly of high-end manufacturing firms in the Cape who have over the years received significant state support. In February 2012 South Africa’s Minister of Economic Development, former General Secretary of Sactwu, reported that 100 South African high-end clothing firms had participated in the Department of Trade and Industry’s incentive programmes, receiving support valued at R1 billion. Recipients of these subsidies must comply with the terms of NBC agreements, disqualifying Newcastle’s Chinese manufacturers who do not pay the NBC’s minimum wage, although often pay more through productivity bonuses.

“A key problem with the system is that it is large capital-intensive firms, producing clothing for relatively high-income consumers, which set the minimum wage. They are not being threatened by firms at the other end of the market that produce basic goods for the mass market,” Nattrass said. “There is no reason to think that the high-end industry and its jobs would be threatened by firms competing in a different market.”

Bernstein agreed strongly with the thrust of the report which proposes that South Africa adopts a more differentiated approach to wage-setting that enforces basic standards of employment, but tolerates low-wage employment coupled with productivity – linked pay.

“We need a regulatory framework that is fair for all workers and that encourages investment and creates large numbers of jobs where workers can learn on the job and increase their skills and their ability to earn”, she said.

Noting that wages and costs were rising in China, Bernstein said that South Africa needs to capitalise on the opportunity this creates to attract new factories or expand others. “If South Africa could develop a policy environment conducive to labour-intensive industry, we could generate many, many new jobs.”

“To do this, we need to make some of the ‘tough choices’ the National Development Plan talks about. We urgently need to create the regulatory framework, employment relationships and wage regime that can compete for the investors and associated jobs moving out of China”, Bernstein said.

For further information or for an opportunity to interview either Ann Bernstein or Nicoli Nattrass, please contact Sarah Hudleston, Media and Communications Manager, of the Centre for Development and Enterprise on 011 482 5104 or 083 675 8821 or email her at sarah@cde.co.za.