CDE @ 25 | Trevor Manuel on SA and the next five years:  How do we resolve our political and economic crises? 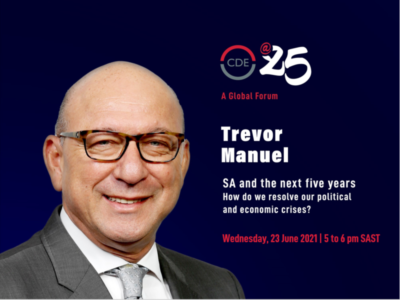 Trevor Manuel is chairman of Old Mutual and a South African politician who was Minister of Finance from 1996 to 2009 and Minister in the Presidency from 2009 to 2014. As chair of the National Planning Commission, he oversaw the drafting of the country’s first National Development Plan. He has served on important international committees and commissions and now holds various offices in both the public and private sectors. See his bio here.

Trevor was in conversation with Ann Bernstein, CDE’s executive director. The conversation focused on South Africa and the next five years: How do we resolve our political and economic crises?

Opening remarks were given by Roger Jardine, chairman of FirstRand.