CDE @ 25 | Sir Jeffrey Jowell on ‘Can countries succeed without the rule of law?’ 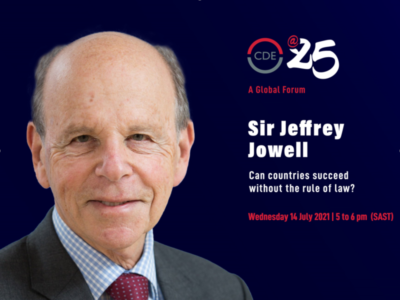 Sir Jeffrey Jowell is Emeritus Professor of Public Law, University College London where he was Dean, Head of the Law Faculty and Vice Provost. He is an international authority on constitutional and administrative law. In his role as an academic and practising lawyer, he has advised on the constitutions and human rights issues in a number of countries, including South Africa. He is founding director of the UK’s Bingham Centre on the Rule of Law, set up to advance the rule of law worldwide. In 2011 he was knighted “for services to human rights, democracy, and the rule of law”. See his bio here.

Jeffrey was in conversation with Ann Bernstein, CDE’s executive director. The conversation focused on the question Can countries succeed without the rule of law?

For 25 years CDE has influenced policy in South Africa’s democracy. We have established ourselves as a unique policy think tank and prominent public ‘voice’ promoting enterprise and development in South Africa and emerging markets. We have built a wide network throughout the country and with leading global experts and think tanks, especially in democratic developing countries..