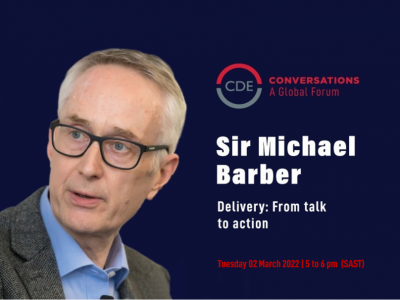 Sir Michael Barber, global expert on implementation of reform and large-scale system change, is best known for his work on supporting governments, cities and national departments around the world to deliver services that citizens need. Founder and chairman of global advisory firm, Delivery Associates, he set up the Prime Minister’s Delivery Unit for the Tony Blair government from 2001 to 2005. He was knighted in 2005 for his contributions to improving government. See his bio here.

Sir Michael was in conversation with Ann Bernstein, CDE’s executive director. The conversation focused on Delivery: From talk to action.