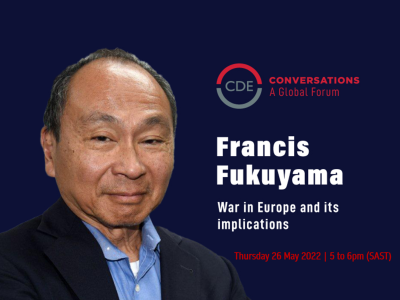 Francis Fukuyama is one of the world’s most prominent public intellectuals. He is Senior Fellow at Stanford University’s Freeman Spogli Institute (FSI) for International Studies and a faculty member (former director) of the Institute’s Center on Democracy, Development, and the Rule of Law. Since 2005, the FSI has cultivated rich academic ties and relationships with over 200 Ukrainian scholars and civic leaders as part of its mission to support democracy and development domestically and abroad. See his bio here.

Professor Fukuyama was in conversation with Ann Bernstein, CDE’s executive director. The conversation focused on Russia’s invasion of Ukraine and the global implications of this war.