CDE @ 25 | Nancy Birdsall on ‘Does the middle class matter in a developing country?’ 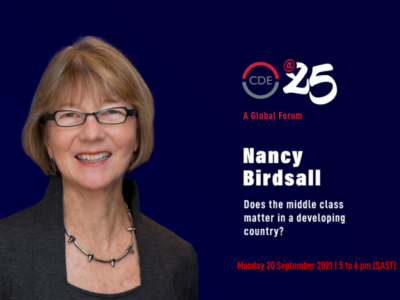 CDE convenes a series of global conversations on democracy, business, markets and development..

Nancy Birdsall is president emeritus and co-founder of the Center for Global Development (CGD), widely recognised as one of the foremost policy research institutions in the world and based in Washington, D.C. She is a senior fellow at CGD, and was previously executive vice-president of the Inter-American Development Bank and director of the Economic Reform Project at the Carnegie Endowment for International Peace. See her bio here.

Dr Birdsall was in conversation with Ann Bernstein, CDE’s executive director. The conversation focused on Does the middle class matter in a developing country?

The webinar aired on the 20th September 2021