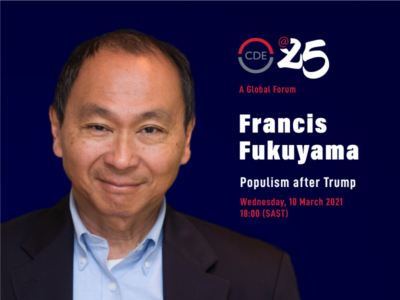 Francis Fukuyama is one of the world’s most prominent public intellectuals. He is senior fellow at Stanford University’s Freeman Spogli Institute for International Studies and director of the institute’s Center on Democracy, Development, and the Rule of Law. See his bio here.

Does the end of Donald Trump’s presidency point to the resilience of democracy, or are we likely to see an even stronger populist surge in America and elsewhere? Professor Fukuyama has argued that the world is in the midst of a “democratic recession.” Is that likely to continue in the post-Trump era?

Professor Fukuyama was in conversation with Ann Bernstein, CDE’s executive director. For 25 years CDE has influenced policy in South Africa’s democracy. We have established ourselves as a unique policy think tank and prominent public ‘voice’ promoting enterprise and development in South Africa and emerging markets. We have built a wide network throughout the country and with leading global experts and think tanks, especially in democratic developing countries