Can SA really afford a basic income grant? The short answer is no 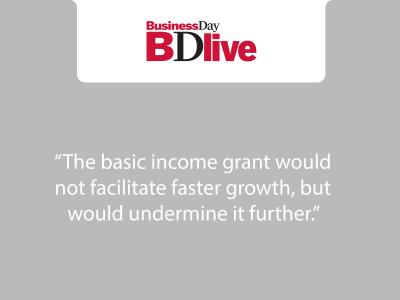 While superficially appealing, it would significantly undermine the quest for faster growth and more jobs

SA is in the throes of a serious debate about implementing a basic income grant BIG. The key issues include whether a BIG is affordable, whether it would deepen the crisis of sustainability of the country’s public finances, and whether it would lower the rate of economic growth and job creation.

About 60% to 70% of South Africans are poor. The single greatest driver of poverty is our exceptionally high and rapidly rising level of unemployment. The ANC appears to have lost confidence in its ability to deliver the jobs needed to reduce poverty. A BIG is now seen by many of its key leaders as essential for continued electoral viability.

There is no single position advocated by proponents of a BIG, though there is general agreement that if a BIG were to make a meaningful contribution to reducing poverty, many people would have to be eligible and the value of the grant would have to be meaningful. Most proponents seem to think that a BIG should cover all adults or all unemployed adults, and that it should be worth at least R800 per month. This would cost R200bn – R300bn a year, depending on eligibility rules.

A BIG should not be seen in isolation of other policies that seek to achieve the same broad goals. Social and economic policy in SA is determinedly redistributive. Social grants already account for a larger share of national income than is the norm for developing countries.

The national government spends about R2.1trillion a year, of which more than half is accounted for by the “social wage”: mainly free and near-free education, health care and social grants. These spending programmes deliver services disproportionately to poorer households.

However, care must be taken with the figures because the costs of delivering services such as education and health care are driven by public sector wages, and the rise in spending does not mean an increase in the value of these services to the poor when the quality of those services is low.

Apart from redistribution funded through the budget, a number of policies seek to direct income, wealth and opportunity to individuals, households and firms to achieve economic transformation. Again, a certain amount of caution is required because much of the value transferred in these schemes is concentrated in a few hands.

The critical question is whether SA can afford a BIG. The short answer is no. The country has been running a large structural deficit for nearly15 years. The result is that the ratio of debt to GDP has risen rapidly. Current spending is unaffordable, so adding a large, permanent spending commitment to the mix will only reinforce the unsustainable character of fiscal policy, with devastating consequences, especially for the poor.

Some proponents of a BIG recognise that a large, permanent increase in spending must be accompanied by new tax revenues. The Institute for Economic Justice has proposed a plethora of new taxes or increases to existing taxes that it says could raise up to R300bn a year in new revenue. However, the assumptions it has made are deeply flawed and implausible. Raising new revenue at this scale would be far more difficult than it suggests.

A more significant problem is that proponents of a BIG have made no serious attempt to assess the extent to which the imposition of a tax shock of the scale they envisage would slow economic growth, and by how much. Yet this is a near certainty, which means that even if a BIG were accompanied by new taxes to pay for it, the negative effect on economic growth would mean it would become even more difficult to stabilise the debt ratio.

One response to the challenge of a BIG’s non affordability is to propose that its introduction be accompanied by a selected range of growthfriendly structural reforms. The resulting growth, so the argument goes, would generate the resources needed to pay for the BIG.

Advocates of this approach do not take sufficiently seriously the risk that the BIG will itself slow growth. The proposed reforms are unlikely to raise growth rates sufficiently to offset a further rise in public spending, or will do so but only over a long period. The overwhelming likelihood is that the introduction of a BIG would raise the debt ratio by worsening the sustainability of the public finances.

By undermining the credibility and sustainability of macroeconomic policies, a BIG would make it less likely that any set of reforms would induce the growth that would be needed to fund the BIG itself. The BIG would not facilitate faster growth, but would undermine it further. Therefore, to the extent that a BIG is to be implemented, it should be introduced after growth rates have been raised, not before.

There is no magical solution to the enormous challenge of poverty. Poverty can be reduced, but doing so will require determination, boldness and an approach to economic growth, jobs, governance and redistribution that is different from what we have now The focus has to be on employment creation and poverty reduction, which means the strategy must maximise faster and more labourintensive growth and vastly improve the outcomes of redistributive spending. The most important component of the solution to our challenges is faster growth. This requires a credible pathway back to sustainable public finances, the unsustainability of which weighs down on the economy through increased uncertainty, lower investment levels and higher interest rates.

Considerably faster progress is essential in overcoming the hard constraints on growth, especially electricity generation, logistics and skills. We need far more market friendly policies that lower the cost of doing business and help raise levels of investment. Above all, we need to tackle the collapse of governance. Without effective action against state corruption and lawlessness, there is little chance of sustained economic growth.

The government needs to grasp the nettle of labour market reform. SA’s employment law and its wagesetting systems create onerous demands, especially on small and new businesses. A more accommodative labour market regime has the potential to spur employment creation, especially for unskilled workers, whose labour is more likely to be demanded by small firms.

Current redistributive spending on mainly education and health care is deeply problematic. Fixing these broken systems is long overdue. There are no easy answers to SA’s socioeconomic challenges. The truth is that we have dug ourselves into a deep hole, one from which we can extricate the country only with sustained economic growth that is as rapid and as labour intensive as possible.

A BIG, while superficially appealing, would significantly undermine the quest for faster growth and more employment by making our public finances even more unsustainable, which could lead to fiscal and financial crisis.

Magical thinking about the benefits of a BIG that ignore the costs and risks does more harm than good.

Significant progress on faster growth, more jobs and the quality of existing redistributive spending has the potential to draw millions of excluded people into the economy rather than merely compensating them for their continued exclusion.

Bernstein is head of the Centre for Development and Enterprise. This article is based on a new CDE report, “Poverty and the Basic Income Grant: Six questions about a BIG“.