A risky basic income grant could come with some nasty surprises 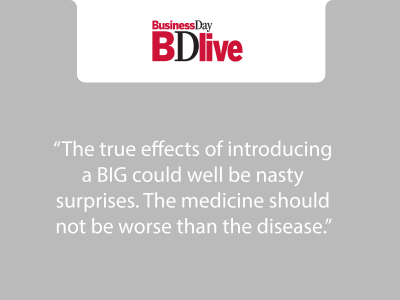 The net result of introducing a BIG will be higher taxes, slower growth and less employment.

Like the February budget, Wednesday’s medium term budget policy statement will reflect the government’s understanding of the constraints it faces, and the consequent need to choose between competing priorities.

The police minister may want to expand the police force, the education minister may want more teachers, the human settlements minister might want to build more houses and union leaders will want everyone to be paid more. But stakeholders cannot all have what they want because we live in a world in which the unavoidable cost of doing one thing means not doing something else.

What distinguishes governments from you and me is that they can raise taxes, borrow money and print cash in ways households cannot. For that reason, the government must make choices not just about what to do with its money, but how much money to spend and how to finance it

In recent years neither the medium – term budget nor the budget has delivered clarity on all these choices. If you read the documents closely you can see the government is committed to fiscal consolidation, but it is also committed to spending a lot more money, including on infrastructure, job creation, new social grants and expanding capacity.

It is committed to funding new spending through new taxes, but full of doubt that the new taxes will actually generate additional revenue because recent experience has demonstrated the opposite. It says structural reform to raise growth is being implemented, but it is unwilling to raise its growth estimates since it knows this will not be seen as credible (or it does not really believe reform will happen or that growth will come).

The absence of clear choices by the government reflects deep divisions within the cabinet We have a divided government More precisely, it appears that everyone but the National Treasury and finance minister refuses to accept that the government cannot afford to do everything every politician, policy wonk, tenderpreneur, subsidy requesting firm or self – aggrandising official thinks is a good idea.

This failure to set out and commit to unambiguous choices seems likely to continue in this medium – term budget, with the key source of likely uncertainty (once again) whether SA can afford to make the R350 a month social relief of distress grant permanent so that it essentially becomes a basic income grant (BIG), and even to raise its value.

Our view, and as far as we can tell the view of the Treasury and finance minister, is that SA cannot afford to implement a BIG. Indeed, if the Treasury felt a BIG was affordable, it would have implemented one already. Instead, what it has said repeatedly and correctly is that a BIG is a permanent new spending commitment that has to be funded through new taxes. These, it has said, might not generate the necessary revenues, and more importantly will slow the economy further.

However, a number of policymakers either disagree or do not care. Seeing a BIG as a vehicle for reducing poverty and, not irrelevantly, shoring up electoral support they think the costs will be outweighed by the benefits. Or perhaps they think there are no costs at all and a BIG can be introduced without meaningful disruption to the economy. This is also the view of a number of nongovernmental organisations and thinktanks that are trying to drive the debate on a BIG.

If that is their view, a new paper published by Economic Research SA, a clearing house of economic research funded by the Reserve Bank, will hopefully disabuse them of their assumptions and easy prescriptions. Written by three people with long associations with the Treasury and the Bank, the paper reports the results of a modelling exercise that sought to estimate the macroeconomic effects of introducing a BIG.

This paper concludes that while a BIG would boost growth by raising the consumption of poor households, this would be completely outweighed by three countervailing effects, all of which would slow economic growth: an increase in taxes, an increase in borrowing costs, and a reduction in non – BIG spending in the rest of government.

In other words, the net result of introducing a BIG will be higher taxes, slower growth and less employment, though the precise mix of these effects depends on how much the BIG costs and how it is financed (how much has to be borrowed, and which taxes are raised).

For a small grant – one valued at R350 a month and, like the social relief of distress grant targeted at 10.5 million beneficiaries – total costs are R44bn. If this amount is financed using the same mix of taxes and borrowing as the rest of the budget is now, the net result is an increase in public debt by R200bn over five years, a loss of 70,000 jobs and a growth trajectory that would be permanently below the pre-Covid19 baseline.

If the grant were somewhat more generous and cost R8Obn a year, and if it were fully funded by new taxes, the effect is more benign: because interest rates do not rise in this scenario, the increase in consumption by poor households creates 84,000 jobs. However, that is achieved if and only if the rise in taxes comes from increasing VAT from 15% to 22%, which would have by far the smallest effect on growth.

If the rise in taxes is “shared” between an increase in VAT and an increase in personal taxes, the economy loses jobs. If the cost is financed along the lines of the rest of the budget (partly by taxes and partly through new borrowing), the effect is a rise in debt of nearly R500bn and a loss of 200,000 jobs.

It is possible that someone might argue that even if these costs are accurately modelled, the price of slower growth and fewer jobs is worth the benefit of less poverty among the unemployed. That response would be wrong. As the authors of the paper note, there are huge uncertainties associated with this kind of exercise. “Modelling the macroeconomic effects of social policies and their fiscal ramifications is inherently complex,” they write, “particularly for dramatic policy changes that have not been implemented previously.

Translated into layperson’s English, what they are saying is that doing something big and risky is big and risky, and that the true effects could well be nasty surprises. As they conclude, “an unfunded expansion of the social transfer system could lead to even worse economic outcomes: the medicine should not be worse than the disease.”

Liz Truss and Kwasi Kwarteng experienced this in Britain when their fiscal surprise package sent markets into turmoil and cost them their jobs. As our finance minister prepares for the medium – term budget policy statement, he might want to keep their experience firmly in mind.

Bernstein is head of the Centre for Development and Enterprise.